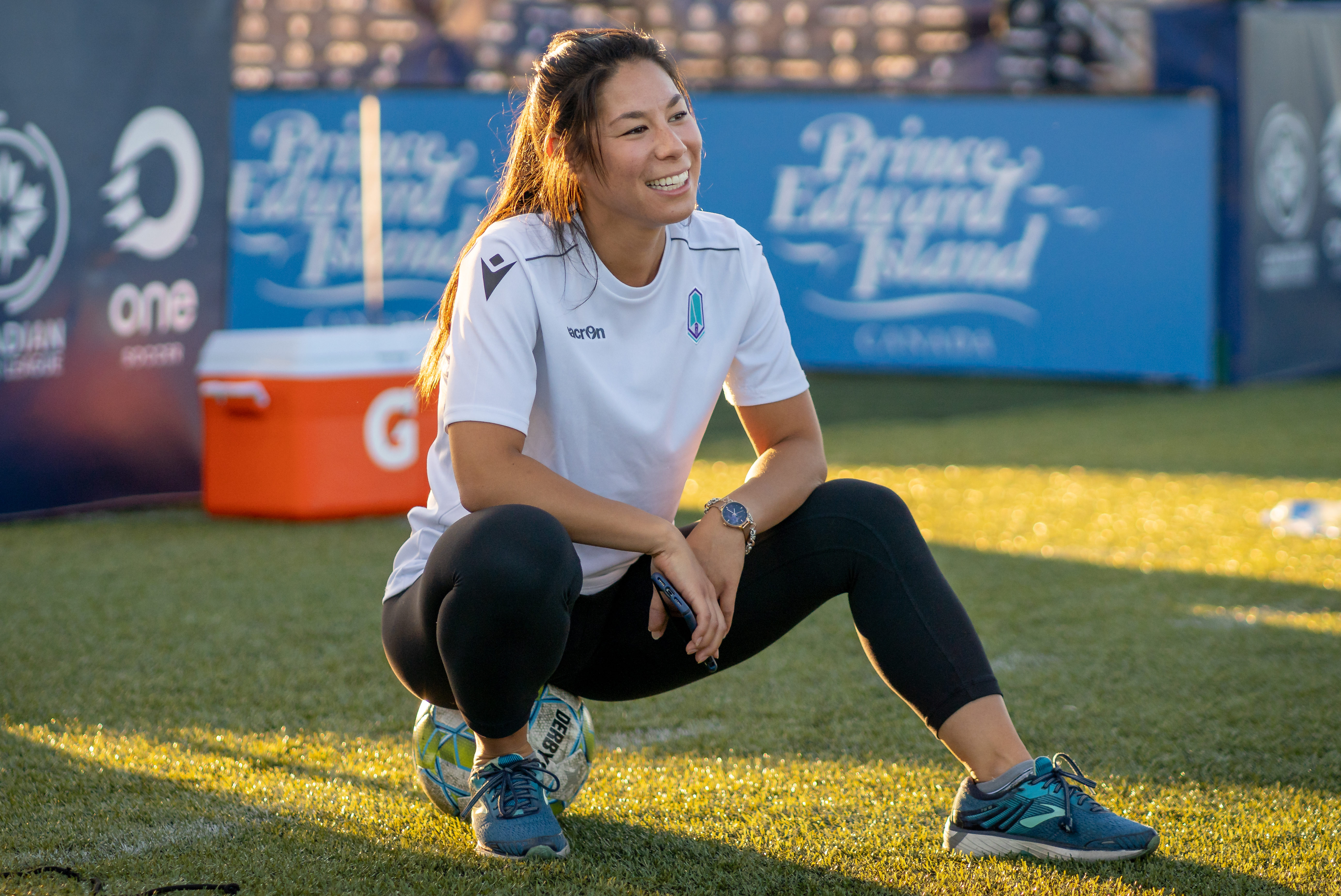 This month in particular is an important time to do so for her – May is Asian Heritage Month in Canada, and Raps is half-Japanese.

Her mother is of Japanese descent and was born in Canada to a Canadian father and a Japanese mother. Her mother, Raps’ grandmother, was originally from Yokohama, Japan, where she met Raps’ grandfather at a military base during World War Two. He was born and raised in Vancouver, and Raps’ grandmother moved with him to Canada after World War Two. They got married, moving to Hamilton a few years after the war ended, after her grandmother traveled to Vancouver by boat, and took a train east. The couple eventually landed in Toronto, where Raps’ mother, and Raps herself, were born and raised.

Her father’s side of the family is Jewish-Canadian, so Raps is mixed-race. Growing up in a multicultural environment like that gave Raps an appreciation of different cultures at the same time.

“I love being mixed,” she told CanPL.ca. “I feel like it allows me to appreciate more and different things.

“Growing up we always celebrated both sides,” she said, adding that her family always takes part in Jewish holidays, and is very in touch with the Japanese side of her family’s heritage as well.

In both cultures, things like food and other traditions are important.

“My grandmother did a lot of Japanese cuisine,” she said. “With any family dinner, it was always incorporated into our meals.

“There are certain significances, for example when I see a cherry blossom tree and think of my grandmother. Little things like that. Not necessarily the items themselves, but what it means to me, and when I see certain things and instantly reflect on my grandmother and the history of our Japanese side.”

Raps hopes that Asian Heritage Month is a month filled with education and awareness about Asian issues, more than anything, especially given an increase in anti-Asian hate crimes during the COVID–19 pandemic.

“I think we should all feel proud of our backgrounds, our cultures, and traditions,” she said. “COVID really brought the anti–Asian hate to the forefront. I think it’s always been a part of society, but now we talk about it, and those conversations are really difficult.

“I don’t think you’re taught to have those tough conversations and get uncomfortable.”

By highlighting things like Asian Heritage Month and the Black Lives Matter movement, Raps hopes those discussions and learning experiences will continue.

“By acknowledging these movements now, we can start that discussion and learn about it – ‘why is it Asian Heritage Month?’,” she said. “It dates back to the 1930s and the Chinese and Japanese immigrants. When you learn about why, and then you start thinking about each decade and the stories of that culture, I think you begin to understand why people feel the way they do and why they are so passionate about drawing awareness to all of these things.”

Both of her parents, as well as her and her brother, were born and raised in Toronto, but that doesn’t stop people from asking ‘what are you’?

“I’m Canadian, but when you see someone that looks different to what you might associate with ‘a Canadian’, you get that question.”

Raps says that while she has personally never been discriminated against because of her Asian heritage, “that’s not to say that I haven’t seen it first hand or that it doesn’t affect me,” she said.

“I have had comments made about me being Jewish – when you look at me, you wouldn’t even assume that (she is Jewish). That was quite shocking, I was quite young when that happened.”

She didn’t have resources to help her after she heard those comments, but hopes things are changing for the better.

“I don’t even think I went home and told my parents,” she said of the incident. “Even now, you might have to ask what those resources are, and some people might find that shameful.

“I hope, especially for kids, that you never feel shame for what you look like.”

The Canadian Premier League is trying to be more diverse, and trying to start conversations about topics like these. A new committee to promote diversity, equality, and inclusion has been set up, with one representative from each club, as well as a few representatives from the league. Raps is Pacific FC’s representative.

“We all have opinions that stem from experiences and upbringings, but we never ask those questions.”

“I think Pa has raised the standards of talking about that kind of stuff,” Raps said. “He’s very vocal and he’s unashamed of it. Our club supports that.

“We are trying to also showcase our local market, and the Indigenous community on Vancouver Island and in BC in general. That’s very important for us as a club, and I think in the years to come the CPL will see the involvement in that and what it means to us. I’m proud that we’re starting to become more vocal, and other clubs [are doing a good job] as well.”

By sharing personal experiences and viewpoints, the aim of the league’s diversity committee is to make the CPL a better place for people of every background or way of life and to focus on addressing things more important than soccer.

“This is going to challenge me, and that is the whole reason why I chose to accept the position,” Raps said.

“I hope that it gives us a platform to begin that communication and to change the language of how we treat one another – what we say and how we say it.”