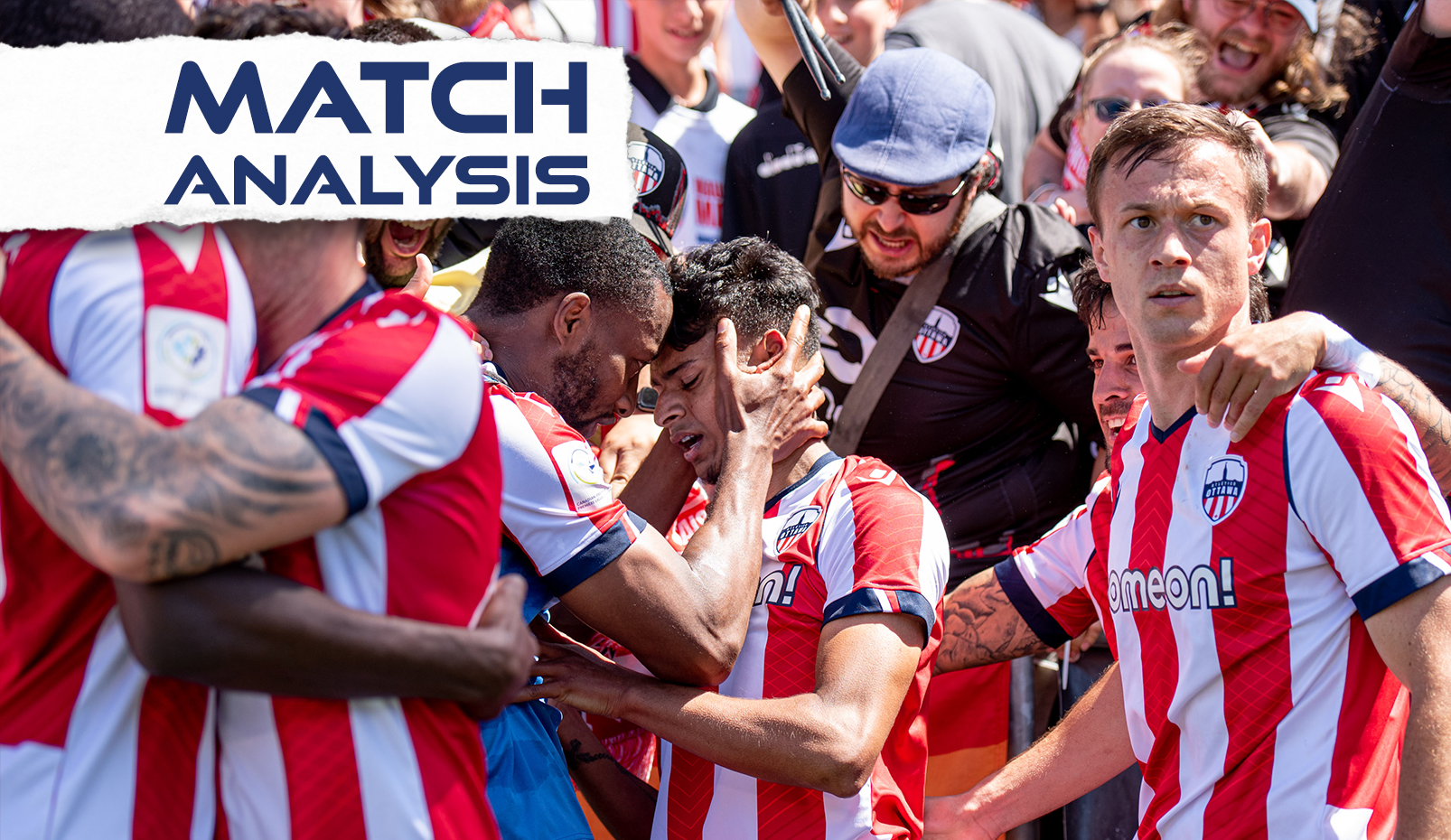 Atlético Ottawa closed the gap at the top of the Canadian Premier League table to a single point after a 2-1 win over Pacific FC at home.

Malcolm Shaw opened the scoring for the home side in the 62nd minute but saw his effort erased, somewhat against the run of play, by Josh Heard in the 86th minute.

For the second straight match, however, Zachary Verhoven’s late winner led to all three points for Atleti, as the one-time Pacific midfielder had the last laugh against his former side.

After making club history earlier in the week by winning back-to-back road matches for the first time, Ottawa went one better today with the side’s first three-game win streak.

In doing so, they feel they have made quite a statement to the rest of the league that the club from the nation’s capital is no longer to be taken lightly.

“It is a great win, three in a row, against the last champion,” said Atleti head coach Carlos González after the match. “Important win, a win that I think sends messages to everyone, for us first, and for the rest [of the league].”

After losing to the defending champions back on May 7 in a match they still feel they should have won, González side overcame a late, and controversial, equalizer from Heard to pick up all three points.

Those points were thoroughly deserved, as Atletico had 1.92 xGs to Pacific’s 0.59. Key to that fact was a slightly new-look formation from Ottawa. Instead of the 4-4-2 that they have mostly played in this season, Atleti lined up in something closer to a 4-1-4-1, with a very compact five-man midfield and Abdoul Sissoko sitting deep in front of the back four.

“We are playing a league of eight teams, we can’t forget that, we know each other very well,” explained González. “So we need to have the capacity to surprise [the other teams] in some ways, so now we are modifying some things. Also, we know better the players, and have more information about the league, so I think little by little we are getting into the best performance of the team.”

Another key to this recent run of success has been squad depth. It was once again a substitute, Verhoven, that scored the winning goal. Especially in attack, Ottawa now boasts a wealth of talent they can bring off the bench at any point with Brian Wright, Carl Haworth and especially Verhoven making their presence felt in recent matches.

“[It is important] to keep all the squad motivated with a good dynamic, feeling they can be important in the team starting in the eleven or coming off from the bench,” said González. “I think this is a key point that we feel that our biggest strength is the team.”

After playing midweek against Valour in Winnipeg, González mentioned how important it was to manage minutes so that his side could keep up their intensity throughout the entire 90 minutes. He and his staff once again did an excellent job of managing the weapons at their disposal.

After playing more of a free attacking role up top in recent months for Ottawa, Ballou Tabla was deployed more as a right-sided midfielder/winger. This put him in very close quarters with yet another Ottawa danger man, Ollie Bassett, and the pair combined excellently to be the fulcrum of Atleti’s dangerous attack.

At any moment, within just a few passes Ottawa could move to ball down that flank from defence (usually Miguel Acosta who played several excellent line-splitting balls), to midfield (either Bassett or Ballou) and into the final third.

The area to the right of the box became a particularly effective operating area for Ottawa as both Bassett and Ballou found themselves in space down this flank at points throughout the match. Unsurprisingly, it was on one such sequence that Ottawa found its opening goal, with Bassett playing a through ball to Ballou on the right side of the box.

Over the course of 90 minutes, 41 per cent of Atleti’s attacking came down that right-hand side during the match. The graphic below shows just how many chances and crosses Bassett (number 10) and Tabla (13) were able to create down that flank.

“In the training sessions, we start to see these synergies you see during the game,” said González. “So we know that some players are starting to have good connections. This is part of the growth of the team, I think little by little we will find these [connections] more in other parts of the field. But I’m very happy from the performance of the right side.”

Both Tabla and Bassett recorded assists during the match. Tabla was especially effective, as he often is, at dribbling into the box and creating chances that way. He had a stunning six successful dribbles during the match and had 11 touches inside the Pacific box.

Bassett, meanwhile, more often pulled the strings of the attack from afar. He had nine total crosses during the match, as well as 19 passes into the final third and four chances created.

Faced with a very compact Ottawa midfield, and no easy way through, Pacific FC abandoned their usual patient and calculated buildup and instead looked to play long balls throughout the match.

It wasn’t overly effective and with just 69.2 per cent passing accuracy in the final third, often gifted Ottawa easy possession. Against a side as dangerous as Atleti in transition, that is never a wise idea.

To be fair, a long ball did result in their lone goal of the match as Alejandro Diaz found Heard behind the Ottawa line. But in the eyes of Pacific FC head coach James Merriman, this was hardly the plan.

“We need to be more patient in our buildup, and not be so quick to hit that longer diagonal,” said Merriman after the match. “I don’t know how many we hit without the correct weight and off the pitch but we didn’t need to. We were not under pressure in those moments, we need to keep the ball, we need to be patient, we need to move the ball side to side.”

The below chart shows just how vertical Pacific was with their unsuccessful passes during the match, many of which, as Merriman mentioned, were made under little pressure. The absence of midfield connector Manny Aparicio through injury, as well as Sean Young, have certainly been felt in recent matches.

The Ottawa midfielder was once again involved in both goals for his side. He had an assist on the game-winner, while it was his clever through ball that allowed Tabla to set up Ottawa’s opener.

Atlético Ottawa remains at home, where they will face York United on Tuesday, June 14 (7:00 p.m. ET), looking for revenge against the side that knocked them out of this year’s Canadian Championship. Pacific, meanwhile, also meets York in their next Canadian Premier League match, as they continue their Ontario road swing on Saturday, June 18 at 4:00 p.m. ET/1:00 p.m PT.