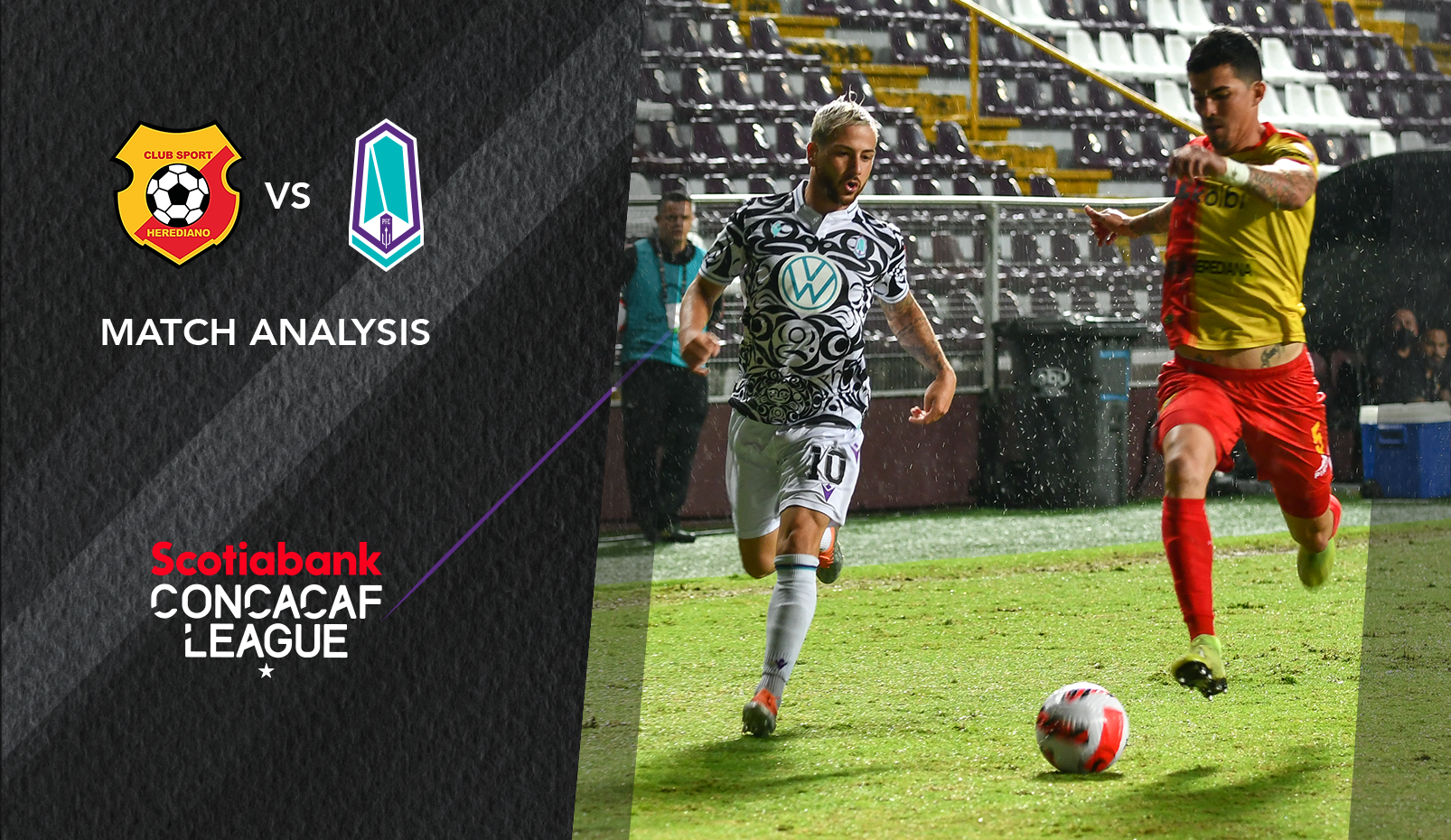 Pacific FC’s first journey in the Concacaf League came to an end on Tuesday night, as they fell in a penalty shootout to Costa Rican side Herediano at San José’s Estadio Ricardo Saprissa. Having lost 1-0 at home in the first leg last week, Pacific entered this decisive fixture needing nothing short of a win to keep their hopes of advancing to the quarterfinal alive.

After a scoreless first half in which both sides enjoyed stretches on the front foot, Pacific suffered an early blow in the second frame, when captain Jamar Dixon was sent off for an exchange with Herediano’s Douglas López. The Tridents did not fold there, however; instead, they made several attack-minded substitutions and, at last, they found their breakthrough in the 89th minute when the ball fell to Gianni Dos Santos at the top of the penalty area. The Dutch-born forward laced a shot low to the goalkeeper’s left and in, making it 1-0 on the night and 1-1 on aggregate, which sent the tie straight to penalties.

Although the Tridents had an early advantage in the shootout when Herediano’s first taker sent his attempt wide of the post, a miss from Djenairo Daniels meant the teams proceeded to sudden-death spot kicks. In the seventh round, Pacific’s Amer Didic saw his attempt saved, before Ariel Soto scored to win it for the hosts and eliminate the Canadian Premier League visitors.

Outstanding away performance ends in heartbreak, but Pacific do Canada proud

Watching this match at the Estadio Ricardo Saprissa, it would be hard to tell that Pacific were playing in just their second ever competitive game outside of Canada, amid their first foray into a continental tournament. Nor would it be immediately obvious which side was 97 years the other’s junior.

Prior to Tuesday, Herediano had played six home games in the Concacaf League. They had lost just one of them. The Costa Rican giants were riding an 11-game unbeaten streak at home before a plucky Canadian team arrived to put an end to that. Of course, this game wasn’t at their usual home stadium due to renovations, but nonetheless they’ll have been far more comfortable in their surroundings than the visiting Pacific.

Entering this second leg with a one-goal advantage thanks to Jefferson Brenes at Starlight Stadium, the experienced Costa Rican side will have felt very confident that they could hold on and perhaps put the tie to bed with another goal or two.

That was not, in fact, how things unfolded. Herediano did end up with more shots than Pacific — 11 to four — but the visitors looked like the better team for far vaster stretches of the match than the hosts.

Had Gianni Dos Santos not scored in the dying stages, a scoreless draw in San José would have been an exceptionally impressive result from a Pacific side that has such little experience playing against a side the calibre of Herediano, in front of a raucous partisan crowd. He did score, though, which pushes this effort over the threshold from impressive to heroic.

Losing on penalties is always heartbreaking, but it’s even more devastating when it comes just moments after the transcendent high of scoring late to force a shootout — as Pacific learned earlier this year against York United. On top of that, Pacific came literal inches from winning the tie on spot kicks; a golden opportunity fell for them when Miguel Basulto missed Herediano’s first attempt, but Djenairo Daniels just couldn’t quite place his shot out of the keeper’s reach.

Great work from James Merriman and his boys tonight, very tough place to go and get a result, but did the West Coast and Canada proud.. https://t.co/9fgsuLfrRG

This is a result that will sting for a while in the Pacific locker room, but they’ll soon begin to process the gravity of their achievement in this first Concacaf League experience. They’ve added two more wonderful midweek games at Starlight Stadium to the memory bank, and they’ve learned no end of lessons from their trips to Jamaica and Costa Rica.

Above all, the Tridents will exit this competition and return to the Canadian Premier League a more confident side with another truly memorable chapter in their history book.

“It shows how far we’ve come as a league and how far we’ve come as a club,” head coach James Merriman said after the match. “We’re proud to be a part of it, and I thought we did show our quality against a very, very strong team. Herediano has had success in this tournament, and this is our first experience. We’ve gained a lot of growth, we’ve gained a lot of experience, and for some of our young Canadian players that’s what this league was created for.”

As Pacific say goodbye to the Concacaf League, so too does the rest of the Canadian soccer community. With this being the final year of the competition in its current form before the Concacaf Champions League expands, it may be a while before we see another CPL club representing the league on the international stage. Over the last four years, Pacific and Forge have truly done their country proud, flying the Canadian flag abroad and making a name for this league in its infancy.

Tuesday will, then, be the latest remarkable chapter in the incredible story of the CPL in Concacaf, and the last to be written for some time.

Herediano prove tough to break down with back five

With Herediano being the home team for Leg 2 and leading by just one goal, all signs seemed to point to the Costa Rican side opening up their attack a little more and trying to score some early goals.

In their domestic league, Herediano are certainly not a low-scoring side. In fact, through the first seven games of the 2022 Apertura campaign, they lead the league with 15 goals scored so far. Prior to Tuesday, they’d scored in each of their last 10 games.

Surprisingly, though, they came into this game in the same 5-4-1 defensive shape they used in the first leg, with wide players Waylon Francis and Keysher Fuller playing more as true fullbacks than wingbacks in a deep-lying backline. They did pick certain moments to press high, especially midway through the first half, but when Pacific established themselves in possession Herediano were quick to revert to their shape and keep their lines flat.

To their credit, Herediano were exceptionally well-organized in that system; manager Hernán Medford has decades of experience in the game, and he clearly has his side clicking very well with how they shift defensively and occupy spaces.

Pacific found it extremely difficult to break the lines when trying to build out of the back; Herediano would often allow them to cross the halfway line with the ball, but from there the Tridents would have few choices but to continue cycling the ball between fullbacks and centre-backs, testing paths to see if a more dangerous pass to the middle might open up.

The Herediano midfield would often step forward to press Pacific’s midfielders — mostly Manny Aparicio or Sean Young — forcing them to play backwards. Both players did extremely well in this match retaining possession in those situations (and occasionally turning them into attacking opportunities), but the Costa Ricans sent an early message that Pacific would have no joy playing centrally.

Lanes into the attacking third very rarely opened up, and instead the bulk of Pacific’s more dangerous attacking chances came when they were able to manufacture some chaos from a broken play or transition. The two chances that Marco Bustos nearly scored in the second half came from disjointed play where Pacific won the ball and sent it forward quickly.

The greatest example, though, was the goal. The play began with an innocuous long goal kick that Josh Heard flicked toward the Herediano backline, but the defender’s header fell fortuitously for Gianni Dos Santos. It’s possible Herediano hadn’t spent as much time scouting Dos Santos as some of the other Pacific attackers, since the shot from distance is a key tool in his repertoire back in the CPL, but he was given just enough space to take a crack at goal.

Pacific were always going to need a little individual brilliance to have a chance in this tie, and they did get it at last — though Herediano certainly made it very difficult.

With the score tied 0-0 and the second half maturing, the moment of Jamar Dixon’s red card in the 55th minute seemed like it could well be curtains for Pacific’s Concacaf League journey. The captain was sent off after a heated altercation with Douglas López, putting the visitors down to 10 men for their second consecutive game.

Both teams, in fact, played the last half-hour of this match without their captain, with Herediano skipper Yeltsin Tejeda going off with injury in the first half, but Dixon’s dismissal seemed like a dagger for Pacific’s chances considering how much of a challenge it had already been for them to find attackers in dangerous areas.

The minutes following that incident, however, proved to be perhaps the most impressive of the whole night from Pacific. James Merriman turned to his bench almost immediately, but not to replace his captain in midfield. He instead took a second midfielder out of the game, removing Cédric Toussaint to introduce Gianni Dos Santos, who would go on to play the hero for the Tridents.

Not long after that, Merriman made a similarly bold substitution, adding yet another forward in Djenairo Daniels in place of his sole remaining central midfielder, Sean Young.

The changes Merriman made were representative of a broader courage that possessed Pacific in this game. They were not afraid of the occasion, nor of the opponent or the atmosphere. Rather than folding when they went down to 10 men, they got better; the players remaining on the pitch ran even more, and they found the goal they needed in the end.

“The work that everybody was putting in — you see the runs that Bustos was making, that Manu Aparicio was making, the recovery runs from Kunle Dada-Luke and Josh Heard; we knew we needed to go and we knew we needed to be aggressive, and we made tactical changes,” Merriman said postmatch. “We made substitutions to be on the front foot and added attacking players to go forward and press and see if we could get a goal. We also allowed them some opportunities, but we got the goal in the end.

“The way the players were able to take those on and shift and change into different positions, I thought it was excellent.”

It’s a bittersweet feeling to bow out of the tournament on penalties as Pacific did, but they certainly proved — perhaps even to themselves — how well they can play even with the odds stacked against them. That extra gear they found with 10 men will be one they’ll try to find as much as possible in the next couple months as they vie for a second Canadian Premier League championship.

Aparicio at his best is the heartbeat of this Pacific team, and he was in many ways the driving force of this result. He spent time playing on both sides of midfield, dropping deep to help defend and sprinting forward to press opposing centre-backs as well. Aparicio’s creative passing and off-ball running helped create many of Pacific’s best scoring chances. Plus, he scored the fifth penalty in the shootout to keep his team alive.

Pacific return to Canadian Premier League action this Sunday, August 28, when they head to Winnipeg for a clash with Valour FC (2:00 p.m. CT/3:00 p.m. ET). Herediano will now advance to the quarterfinals of the Concacaf League, where they’ll play either fellow Costa Rican side Cartaginés or Honduran club Real España.