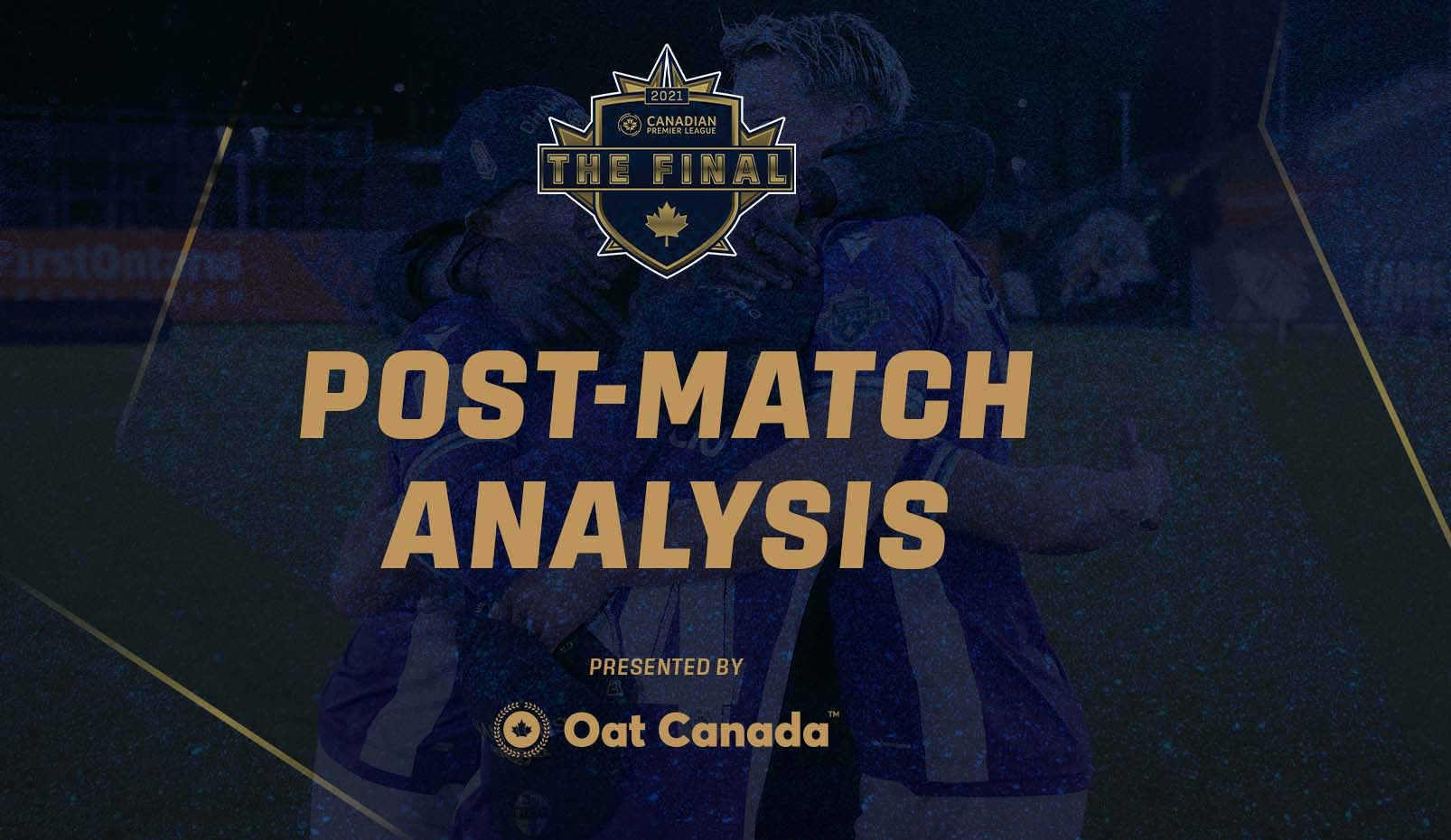 Pacific FC were crowned Canadian Premier League champions on Sunday night at Tim Hortons Field, as they unseated defending winners Forge FC with a 1-0 victory to lift the North Star Shield in Hamilton. Forge had more of the ball and shots, but ultimately that didn’t matter; Pacific defended very well and managed to strike with a well-placed Alessandro Hojabrpour header off a set-piece to take the narrow advantage they needed.

So, Pa-Modou Kah’s Tridents saw out the victory in professional fashion, claiming their first-ever championship. With the title, Pacific will now play in the 2022 Concacaf League as representatives of the CPL.

For the first time, a team not named Forge FC can call themselves Canadian Premier League champions. Pacific, reaching a dizzying peak after three years of growth on Vancouver Island, were deserving finalists after playing some of the best attacking football in the league in 2021 (and scoring more goals than any other side as a result).

On Sunday, it wasn’t their attacking firepower that carried them over the line; rather, it was their intense workrate and well-organized defending that stunted Forge’s best weapons. Pacific made a staggering 39 tackles across the team, many of them coming from the midfield to cut things off before the back four were even tested — though when they were tested, they were on top form as well.

Lukas MacNaughton and Thomas Meilleur-Giguère, a pair that haven’t played together much in 2021 despite being a stalwart duo at the Island Games in 2020, were excellent on Sunday; Meilleur-Giguère, individually, made six tackles, seven interceptions, and four clearances, doing perhaps more defensive work than anyone else on the pitch.

It was a long, challenging season for everyone, and Pacific emerging as champs is a deserved result.

“This group has been fantastic,” coach Pa-Modou Kah said of his team postgame. “From the moment that I was appointed, their trust in me has been huge. They’ve allowed me to coach them. They’ve allowed me to push them. And also, they’ve challenged me. For me, I cannot say enough of this group… Now they can all sit here and say that they’re champions, and that’s something that nobody can ever, ever take away from them. They’re cementing a legacy, not only for themselves, but also for the whole of Vancouver Island.”

Hojabrpour, meanwhile, found himself speechless in the press room after the game. He told reporters that scoring in the CPL Final would surely go down as one of the greatest moments of his life to this point.

Certainly, it’s a fitting end for the championship to be won on a goal scored by a young Canadian player — in fact, a nominee for U21 player of the year.

The visitors’ game plan entering this match was quite evident, from the direct way they seemed to play each time they won the ball. The midfield of Jamar Dixon, Alessandro Hojabrpour, and Manny Aparicio was determined to pick off passes and win tackles against unsuspecting Forge midfielders looking to build up more methodically, and every time a purple-shirted player took control of the ball there was only one direction to go: forward.

Pacific’s vertical play definitely helped them create numerical advantages, with their particular brand of route one football managing to catch Forge in rare moments of disorganization. Joshua Heard, one of the most direct players in the CPL, was constantly bearing down on the left side of Forge’s defence with Kwame Awuah and Dominic Samuel.

On the other flank of the pitch, it was actually that aggressive direct play that led to Pacific’s opening goal. Gianni Dos Santos got forward with speed, managing to get ahead of right-back Elimane Cisse to draw a foul, setting up the free kick that produced a goal. That set-piece, again, was part of the plan for Pacific — Hojabrpour explained postgame that the routine of crowding the penalty area was something they’d worked on in training, although originally he was supposed to be the decoy runner.

Aggression in the press has been a hallmark of Pacific’s most impressive performances in 2021 — particularly their Canadian Championship win over the Vancouver Whitecaps — and although they didn’t necessarily press for 90 minutes in this game, instead choosing moments to sit back, they showed signs of that same determination and 11-man cohesion in counter-pressing that made the difference.

Pa-Modou Kah employed a boxing metaphor in describing his side’s tactic of waiting for their moment to strike — perhaps playing a more calculated attack than their typical full-throttle style. He likened their counter-attacking effort to Muhammad Ali’s win over George Foreman in the Rumble in the Jungle of 1974.

He added: “There’s multiple ways to win a game of football. We just never showed it to the other people.”

What was missing for Forge on Sunday evening?

Indeed, Forge did many things right in this final, finishing with 70% possession and 16 shots to Pacific’s six. Some of the passing from the half-spaces was phenomenal, Kyle Bekker and Tristan Borges picking out some exceptional passes into the box and Kwame Awuah making dangerous runs inside from the flank.

However, the home side fell victim to inefficiency in the final third, with some of their attempts a little forced from areas that weren’t as dangerous as they might have liked.

“We passed, we passed, we passed, we got into zones, we created opportunities,” Smyrniotis said. “We had cutbacks in the box, we had balls crossed, them blocking shots with shoulders, heads, backs. That’s what you get when you have a team that’s sitting very low, you have to find that one moment to crack that line. I think we found those moments, the ball just didn’t go into the back of the net.”

As Forge became more and more desperate for the goal in the final moments of the contest, the play in the final third seemed more rushed and less impactful than it had been in the first half, where their methodical buildup play produced a few more chances in good positions — their only two shots on target came within the first 45, and Pacific ‘keeper Callum Irving handled them capably.

Ultimately, Forge were just lacking that final moment of quality needed to finish a chance — which Pacific did have on the day.

The skillful midfielder was perhaps the busiest player on the pitch, winning balls in the middle and driving forward aggressively. Aparicio covered a tremendous amount of ground and really commanding the middle of the park for the visitors, creating many of their most dangerous counter-attack chances.

This match concludes the 2021 Canadian Premier League season. Both Forge and Pacific will be back in 2022, as they contest the next North Star Shield alongside the rest of the league.