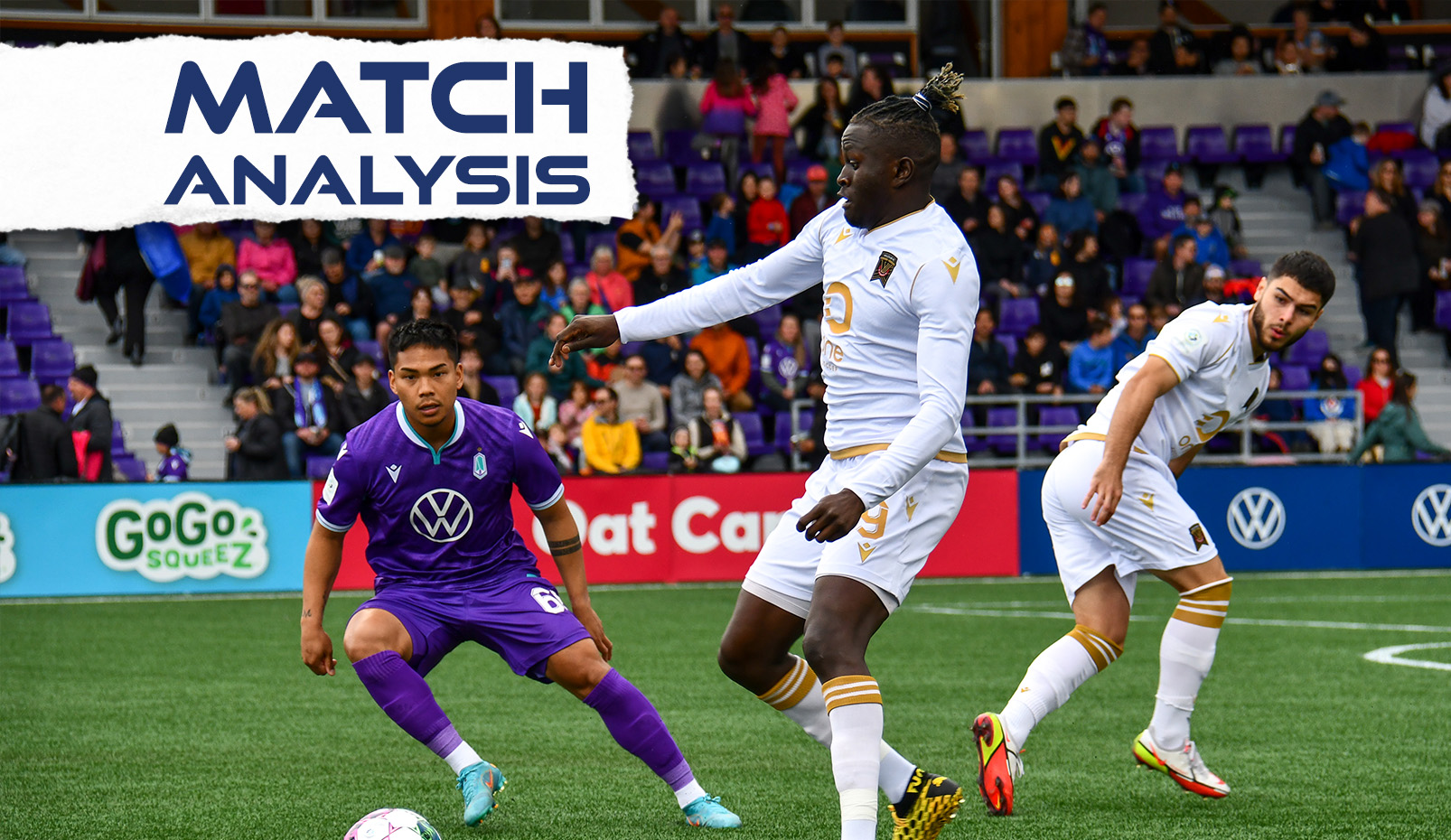 Much like when they first met earlier this season, Pacific FC and Valour FC certainly brought the drama once again on Saturday, combining for a thrilling 2-2 draw in this week’s ComeOn! Match of the Week.

To begin the game, Valour came out flying, nabbing a 1-0 lead through Sean Rea, who scored a goal of the season candidate from way out, before Daryl Fordyce made it two for the guests shortly after half time.

Despite that slow start, Pacific would claw things back in the second half, however, as a fantastic goal from Gianni Dos Santos and a headed tally from Alejandro Diaz allowed them to snatch a result, extending their unbeaten run at home to six matches in the process.

Pacific and Valour pick up where they left off in chaotic match:

Based on what we saw when these two teams last met, which was an entertaining 3-2 Pacific win back in April, it was hard to know if there’d be a repeat of that sort of game this time around. Often, it’s rare to see teams combine for two such games in a row, as teams will adjust heavily in order to avoid a repeat of such an occurrence.

Yet, despite their best attempts to adjust, Pacific and Valour didn’t heed that advice, as that drama was on full display once again in this game. Despite not seeing each other for almost six weeks, both sides just picked up where they left off last time out, not missing a beat whatsoever in ensuring that this game was ramped up to the max.

Right from the beginning of the match, where Valour grabbed the lead off of a magical goal from Sean Rea, to the end, where both teams pushed and pushed for a later winner, leading for tempers to boil over in extra time, this game did not lack for entertainment.

Despite being two very different teams, with Valour looking to be strong at the back and create through their wide players, while Pacific aims to control play on both sides of the ball from the middle, their two styles just create these sort of wide-open matches, one where both teams are left with all sorts of chances. But if anything, that also shows the quality on both sides.

On Pacific’s end, their attacking talent is well-known, as the likes of Alejandro Diaz, Marco Bustos, Josh Heard and Manny Aparicio have led the way this year for them, finding a way to combine nicely on several occasions. You combine the depth that the likes of Gianni Dos Santos, Matteo Polisi, Kamron Habibullah and Djenairo Daniels add on top of that, it means that Pacific isn’t shy in rotating, as they did in this game, for example.

Meanwhile, on Valour, there’s a reason why they’re now the highest-scoring team in the league, as when they get William Akio, Alessandro Riggi, Sean Rea and Moses Dyer going, they can be fun to watch. Especially in transition, where they have the speed and creativity to really hurt teams, they’ve had moments where they’ve been almost unplayable defensively.

Through that, that has led to these two games, one where goals have not been lacking. They won’t be games that the coaches will be happy with when watching back, at least not from a defensive perspective, but it’s certainly been fun for the neutrals, especially those who like goals.

“I don’t know what happened there,” Pacific’s head coach, James Merriman, said of how these teams match up. “But they attack (a lot), they have players that can hurt you in transition, and have some attacking players that don’t stop, they want to continue, so there’s gonna be goals there. And when spaces open (on their end), that’s where we can go in transition as well. So I think there’s always going to be goals between our two teams the way that we like to play.”

“I don’t know (what happened),” Valour’s head coach, Phil Dos Santos, added on his end. “I think when you have two good teams playing against each other, that’s what’s gonna happen. These are two teams that are not afraid, that respect each other, but that also have personality.”

A big area of improvement for Valour so far this season? Their set-pieces at both ends of the pitch, and that continued into this one, especially at the beginning of the match.

In fact, both of their goals on Saturday came off such moments, as Rea’s wonder tally would not have been possible had they not successfully defended a corner just seconds earlier, while Fordyce’s goal came directly off of an offensive corner.

But that was just a reflection of Valour’s dominance on those sort of set pieces on the night, as they really found a way to get some joy in that area.

Starting on the defensive side of things, where they hardly gave up a sniff to a dangerous Pacific side, it really gave Valour structure on the day.

Through Jonathan Sirois, who did a great job at organizing his box and punching most crosses away, along with his defenders, mainly Rocco Romeo and Stefan Cebara, doing the rest, that made them nearly unbeatable in their box on set pieces. As a result, it really allowed them to find some joy at the other end, as they knew that if they stayed solid and avoided giving up any cheap goals to Pacific, they’d be free to do some damage offensively.

So while they’ll be disappointed with giving up two goals in a game they played so well in, the fact that they gave up just 0.82 Expected Goals (xG) on just 10 shots to the team with the most xG for in the league is a big plus, especially considering that they were on the road.

Yet, that’s been business as usual for Valour, who have taken real pride in being a strong set-piece team, noting before the season that it was an area where they could really have some joy. As Dos Santos explained after the fact, he felt that it was a part of their game where his team could really take some steps forward, potentially paying off for them in the long run, and from what he’s seen, he so far feels validated in that choice.

“We’ve been good all season,” Dos Santos said of his team’s set-pieces. “We have this objective at the end of the year, when we look at our chart, we need to be in the plus when it comes to set pieces, to have more goals scored than conceded, because that means you’re giving yourself a chance to win matches.”

Because of that, look for them to continue to grow in their set-piece dominance going forward. It’s not always pretty, but it’s a good skill to have, especially given some of the aerial threats that exist in the league, making Valour’s work in that area quite impressive.

Typically, this season, Pacific hasn’t been one for much traditional wing play, as the wide players in their 4-2-3-1 system typically play a lot more inverted, staggering the field towards the center of the pitch.

With their goal being to get usual right midfielder, Marco Bustos, to play as more of a #10, freeing up the dangerous overlapping threat of right back Kunle Dada-Luke, with a similar partnership happening on the left between Josh Heard and Nathan Mavila, it’s meant that Pacific’s wide threat this season has often come from their full backs, instead of their wingers.

But with Bustos coming off at half time in this game, Pacific decided to employ more natural wide players in his absence, as his replacement, Josh Heard, slotted in as a winger, joining Gianni Dos Santos, who started the game on the left, on the other side of striker Djenairo Daniels.

Through that, Pacific would get right back into the game, turning around Valour’s two-goal lead. First, through their opening goal, which came off the boot of Dos Santos, and then the second tally, which came from a nice cross in from Heard to Alejandro Diaz, their newfound width was key in those tallies, really putting Valour under pressure in those areas.

Yet, that just shows how important that wide threat was for Pacific in this game, as it gave them a bit of a new dimension to their attack. Instead of what they usually try to do on the ball, which is to cut inside and whenever possible, they really tried to attack the wide areas and catch Valour’s defenders on the turn before then sliding into the middle, creating a bit of a new look for themselves.

So seeing that, it’ll be intriguing to see if that’s something that Pacific looks to employ more often, as they continue to evolve tactically as a team. With Dos Santos looking especially dangerous as of late, and Heard remaining his usual steady self, employing them together on the wings could really help them stretch the field, as it did in this game.

“I’m very happy with both of them.”

From there, that would theoretically open the room for some of the players that they have in the middle of the park, which considering how opponents have started to set up against Pacific as of late, clogging the middle whenever possible, could be a good counter to that.

“In the game, in training, we practice that,” Gianni Dos Santos said of his partnership with Heard. “And in a game, we wanted to try it out, and it gave us a good threat on both sides, we were very dangerous (as a result of that).”

Plus, as teams continue to really hone in on Pacific, with them currently being the team to beat atop the table, having that sort of tactical versatility doesn’t hurt, as it will leave opponents guessing.

So although this might not have been Pacific’s finest match, especially in terms of their uncharacteristic slow start, that they emerged with this potential new tactical wrinkle in their back pocket is a plus, one that they’ll look to carry forward into future matches.

Making his first league start of the season, Dos Santos was a force down the left-hand side for the hosts, looking dangerous all match long. Because of that, it felt like his goal was a deserved one for him, capping off a solid night at the office, to which he added two shots, two chances created and three dribbles in a lively performance.

With their homestand now concluded, Pacific will head out on the road now, kicking off a three-game road trip on Sunday, June 5th, when they’ll visit the Nation’s capital to take on Atlético Ottawa at TD Place (10:00 a.m. PT/1:00 p.m. ET). Meanwhile, Valour will return home for a three-game homestand, which they’ll kick off with a game against that same Ottawa side on Wednesday, June 1st at IG Field (7:00 p.m. CT/8:00 p.m. ET).