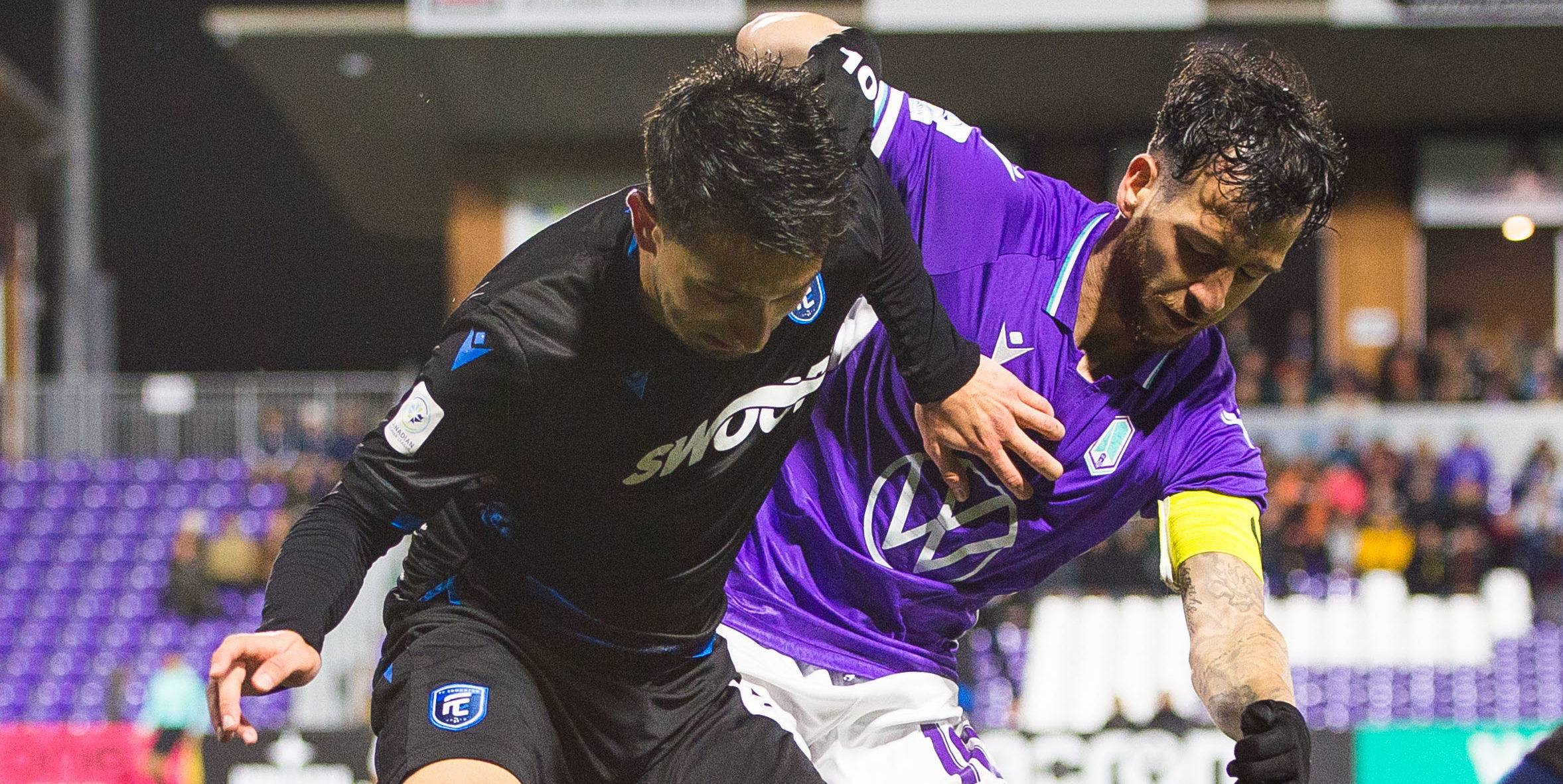 Pacific FC routed the Eddies on a rainy Tuesday night at Starlight Stadium, scoring early and very often to record their largest margin of victory at home in club history — a 5-0 scoreline, when all was said and done. Marco Bustos made his return to the starting XI for the Tridents and he was electric, scoring two goals (one from the penalty spot), and Manny Aparicio scored a pair himself. Alejandro Díaz also scored to become the club’s goals leader so far for this season and move into a tie for third in the Golden Boot race with 10 in CPL play for 2021.

Fraser Aird scored a consolation goal for Edmonton with a penalty kick late in the affair, but ultimately it was Pacific’s night as the Vancouver Island club took over first place in the CPL standing with just two games left to play.

It’s not often you see a team dominate their opposition so thoroughly, but Pacific played almost the entirety of Tuesday’s contest on the front foot. They seemed to drive forward aggressively every time they claimed the ball — which they did quite often — but they were also quite methodical and patient with the ball when necessary.

Pacific scored five goals in this game on just 13 shots, as they worked to create the most dangerous possible scoring chances and took advantage of them effectively. Despite taking an early lead, the hosts never seemed to lose any wind from their sails, looking to continue pouring on the goals even with the result undoubtedly settled late in the second half. To a man, Pacific were ruthless and efficient moving forward: the fullbacks were explosive along the touchlines, and the midfield trio of Manny Aparicio, Sean Young, and Ollie Bassett worked in tandem to win and advance the ball. With the return of Bustos (more on him later), Terran Campbell moved to the left side and did very well, and Alejandro Díaz was elusive as ever (and effective with hold-up play) as a number nine.

There’s certainly a practical benefit to Pacific being so unrelenting on Tuesday: with a four-goal swing added to their ledger, the Tridents now hold the best goal differential in the CPL (+15, four up on Forge’s +11), which may come into play for playoff positioning if things remain tight in the last couple weeks. Beyond that, though, the psychological benefit of Pacific’s attack coming alive so emphatically will surely be a boost after some up-and-down form recently (two wins, four losses in the six matches prior to Tuesday).

“I think it’s been a long time coming,” coach Pa-Modou Kah expressed to reporters postgame. “We had games where we could’ve killed off oppositions but we allowed them back into the game, and today there was no thought about it. We wanted to be greedy — and by that I mean, we went up 3-0 and then there’s no time to relax, you go for more.”

If this explosion from Pacific is a sign of things to come, no CPL opponent will relish a trip to Vancouver Island in the playoffs.

The overarching theme of the 2021 season for FC Edmonton has been that they remain a work in progress, with this being Alan Koch’s first year in charge. That was certainly clear on Tuesday night as the Eddies were unquestionably a step behind the opposition in most facets of the game, and they were thus punished for it.

Edmonton gave the ball away cheaply (they had a team-wide passing accuracy of 66% in the first half), and they were drawn out of position too often; save for perhaps 10 minutes late in the second half, they never really had an extended phase of threatening possession. Pacific did well not to allow their opponents to get a foothold, but the Eddies did not do themselves many favours.

Koch was measured in his postmatch availability, explaining that a result like this is firm evidence that his side is still not yet consistently at the level of the teams contending for the playoffs right now. The Eddies have rarely been dominated by opponents this year, but they’ve been missing the consistency of the top sides.

This time, of course, they were dominated by Pacific, especially in the first half, but nonetheless this 5-1 defeat seems like a moment that the Edmonton coaching staff will use as a lesson for the squad as they continue to, as Koch often says, attempt to narrow the gap.

“We’ve played Pacific five times this year; we beat them once, they beat us twice, and we’ve had two draws. We’ve had some good contests, we’ve had some good battles. Tonight showed the difference. There is a difference still. We know how far we’ve come, we probably see it more internally than I think you may see externally, but tonight definitely showed we still have a long way to go. So we definitely want to get a positive reaction, we have two very important games at home; we get a little bit of time to rest and digest and we’ll get as much out of this game as we can to prepare ourselves for the next one.”

FCE have two games left this season, both of them at Clarke Stadium, in which Koch will want to see his team respond to this heavy loss with a statement rebound performance.

There’s no player in the Canadian Premier League quite like Marco Bustos. His return to the lineup (with the captain’s armband to boot) on Tuesday night was, therefore, welcome news to the Vancouver Island faithful — and that’s no knock on the way Pacific’s attack has performed in his absence, either. In the two months he missed due to injury, Pacific’s other attackers stepped up extremely well and continued to score effectively against pretty much every opponent.

However, Bustos provides elements that nobody else in the league can. He returned to his usual office on the right wing, and his presence was instantly noticeable; even with the play on the opposite side of the pitch, it seemed important to take note of where Bustos was. The 25-year-old reads space exceptionally well and constantly understands the bigger picture in his side’s attacking buildup — more than once, he could be seen directing traffic from across the pitch, and even when he did get the ball he was often quick to give it right back to buy other teammates time to get into the right areas.

With Kunle Dada-Luke playing at right-back, he and Bustos weaved in an out along the touchline, both players looking just as comfortable making overlapping and underlapping runs to pull Edmonton’s defenders away from each other and open up channels. Just before Pacific’s first goal, Bustos made a hard dummy run inside to pull Tboy Fayia with him and allow Dada-Luke to drive forward and play in his cross:

The first goal of the match goes to @werodiaz for @Pacificfccpl #CanPL l 📺: @onesoccer pic.twitter.com/C6hjh9v70m

Bustos’ first goal was, as well, a tremendous individual effort; he was quick to spot that teammate Manny Aparicio could win the ball in midfield, and he was immediately off to the races with Edmonton’s backline sitting well behind the midfield and leaving massive space. Bustos usually favours his left foot quite heavily, but he took his run to the outside of the defender in the box and finished clinically with his right.

His coach Pa-Modou Kah was, of course, thrilled to see the talented winger back in the lineup — although he did chide Bustos postmatch for conceding the penalty kick late in the game: “I think he was excellent. He will know that I will talk about one thing I think he should have done better, because he gave away a penalty — you can say maybe he’s coming back but a man of his calibre should have done better — but overall his performance was fantastic to come back. This is his third game, his first start, and you can see what he brings to the team.”

The return of their talisman has come at the perfect time for Pacific FC with the playoffs (and the Canadian Championship semifinal) looming.

Most Pacific players deserved at least some consideration for this nod, but Bustos’ return was the prevailing storyline. The star winger did not disappoint, controlling play all over the pitch and reminding the rest of the CPL why he was a major contender for Player of the Year before his injury (and certainly still is).

Pacific will be back in action at home this Saturday, when they host York United in a ComeOn! Match of the Week with massive playoff implications (6 pm ET/3 pm PT).  In addition to its website and app, OneSoccer is now available on TELUS channel 980 and on Fubo TV. Call your local cable provider to ask for OneSoccer today.