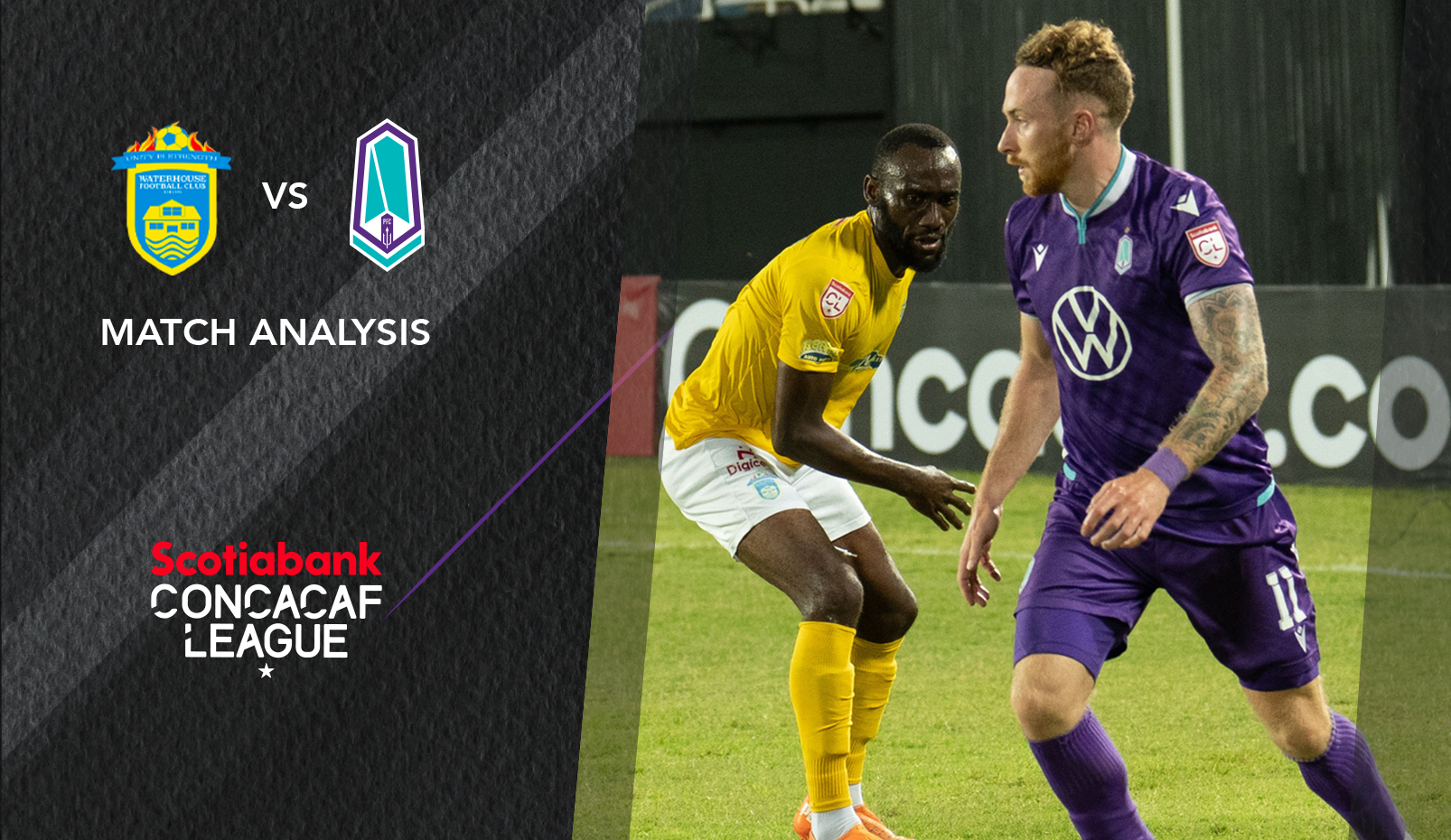 Pacific FC settled for a scoreless draw with Jamaican side Waterhouse FC on Tuesday night at Sabina Park. Neither team quite managed to solve the other on a humid evening in Kingston, as this Concacaf League preliminary round tie finished 0-0 after the first leg.

The visiting Canadian side had the lion’s share of scoring chances, though not many of them were particularly dangerous. So, Pacific will head back to Vancouver Island for next week’s second leg knowing that a win of any kind would see them through to the round of 16.

This contest didn’t necessarily offer much in the way of free-flowing, effective attacking football, with neither of the two sides spending much time in the other’s attacking third. This was a fairly disjointed contest, especially through the middle, with lengthy strings of positive passing very difficult to come by.

The scoresheet paints an even picture of this game, with both sides enjoying about 50% possession. Pacific had more shots — 14 to Waterhouse’s nine — but the match didn’t open up for them in the way they might have wanted.

It nearly did on a couple of occasions, though, for better or for worse. Around midway through the first half, Pacific coach James Merriman briefly shifted right-back Kunle Dada-Luke to the left to try and give him a different matchup and affect the game differently. In that phase of the match, the ball seemed to get from end to end quicker with both teams playing it long and looking  to run at one another, but it was Waterhouse who got in behind Pacific’s defence more.

One of their quick balls did find a pocket of space behind Pacific’s left-back and left centre-back, and although several Pacific players stopped playing expecting it to be called offside, it ended up in one of the best chances either side had all night — stopped by Callum Irving, of course.

Later in the game, when Merriman added Djenairo Daniels to the mix up front, Pacific went through a period of playing more directly. They used Daniels’ pace to get in behind more and they generated a few half-chances, but they couldn’t find men in the box to finish off those attacking moves.

“I thought for our group it was an excellent effort,” Merriman told reporters after the game. “It’s not an easy place to come and play with the pitch, and Waterhouse caused problems in transition and they had some good chances as well. We had chances, we didn’t take our chances, but overall we’re okay, we’re happy at 0-0.”

Waterhouse for the most part seemed to struggle to get their own attacking play clicking; their domestic season ended around a month ago, so they’re a little out of match fitness at the moment and it showed in some of the sluggish or errant passing. Pacific, meanwhile, having travelled so far, were similarly prone to errors that impeded attacking rhythm.

In the second leg, it feels as though a moment of individual quality will be needed to break things open — whether it’s a shot from distance (of which both sides attempted many), or a winger like Marco Bustos beating his defender to cut inside and find space.

As mentioned, Pacific likely had the better of the chances in this game. Knowing it would be hard to fully break out in transition or unlock the opposing backline regularly, the Canadian side will have put some concentration on the one source of scoring opportunity they’d be able to generate consistently: set-pieces.

Pacific did very well to create those dead-ball scenarios; a few times, rather than lose the ball with low-percentage passes, attackers would send in shots or crosses that were more likely to be deflected behind for a corner. Indeed, it seemed that the visitors identified early that the opposing keeper had a tendency to palm away shots from distance rather than catch them, which won a few easy set-pieces.

The problem, however, was that Pacific were quite wasteful with those set-piece attempts. They’re typically dangerous from those situations — Amer Didic, in particular, is one of the CPL’s most dangerous aerial threats — but in this game, their deliveries just couldn’t find purple shirts in the box.

Pacific had eight corners, plus four more free-kicks in Waterhouse’s half, none of which ended up really testing opposing ‘keeper Kemar Foster.

In the early second half, the Tridents also did test a few times from open play, particularly with quick balls between the centre-backs, but again they didn’t make use of the areas they got into.

All that said, serious credit must be given to the men between the posts at both ends of the pitch. Both Foster and his opposite number Callum Irving were exceptional in this match, each being called upon several times to make game-saving stops. Waterhouse’s Foster produced an impressive eight saves, and Irving had three of his own — none of which was easy.

The two ‘keepers were very aggressive, coming well off their lines to pounce on loose balls in the penalty area and refusing to allow forwards enough time on the ball to place their shots well. Foster and Irving will both leave this match having done their jobs extremely well, with a pair of well-earned clean sheets.

Pacific happy to take draw back to second leg at home

If you’d asked James Merriman before Tuesday’s game whether he would have taken a draw heading into Leg 2 of this tie, the answer would probably have been yes.

It can’t be understated how difficult it is for teams to travel as far as Pacific did for this game, particularly after playing just four days prior on Friday night. With various flight delays and other speed bumps on their way from Victoria to Kingston — including part of the trip where sections of the squad were separated, Merriman revealed postmatch — this was always likely to be an uphill battle for the visitors.

However, Pacific were up to the task of putting in a resolute performance on the road. Merriman said as much in his press conference after full time, though he did lament that his side had left a couple chances unfinished.

“This wasn’t easy circumstances with our travel. With the energy of the group and our workrate, everybody stayed very positive and it was an excellent team effort. I think we had very good chances to start the second half and we could’ve — should have — taken one or two of those but we didn’t and they had chances as well. Nil-nil, we’ll take it; we have an important match against Valour before the next leg at our home.”

Indeed, a 1-1 or 2-2 draw may also have been preferable for Pacific, with the away goals rule in place (any draw other than 0-0 in Leg 2 would mean Waterhouse advance), but this result still suits the Canadians. They’ll head into next Tuesday’s decisive leg with, by most accounts, a significant advantage.

In CPL matches at Starlight Stadium this year, Pacific have five wins, three draws, and just one loss, and they’ve outscored opponents 17-12. They’ll be far more used to playing on the artificial turf in Langford, and the partisan crowd is likely to make for a livelier atmosphere than there was Tuesday at Sabina Park.

“We’ll make sure that we come in prepared and come in motivated,” Merriman said of Leg 2. “We’ll have a great crowd, we have great fans at home that’ll be looking forward to that match. We have a little bit of time now to prepare our players and feel good coming into the second leg.”

Waterhouse manager Marcell Gayle acknowledged postmatch that the second leg will be difficult for them, particularly because of the turf pitch. He suggested that the return fixture should be a much faster game, for which his side will be well equipped.

It’ll nonetheless be a welcome turn of fortunes for the Canadian team to be the one enjoying a home advantage, with Waterhouse likely to embark on an odyssey of their own to get to Vancouver Island. Of course, Pacific do have to play Valour FC in the league on Saturday before focusing fully on Leg 2, but nonetheless they’ll fancy their chances of potting a goal or two at home.

The hard-working Pacific midfielder covered more ground than anyone on the pitch on Tuesday, popping up all over the place winning balls and combining with the front players to function as his team’s best link between defence and attack.