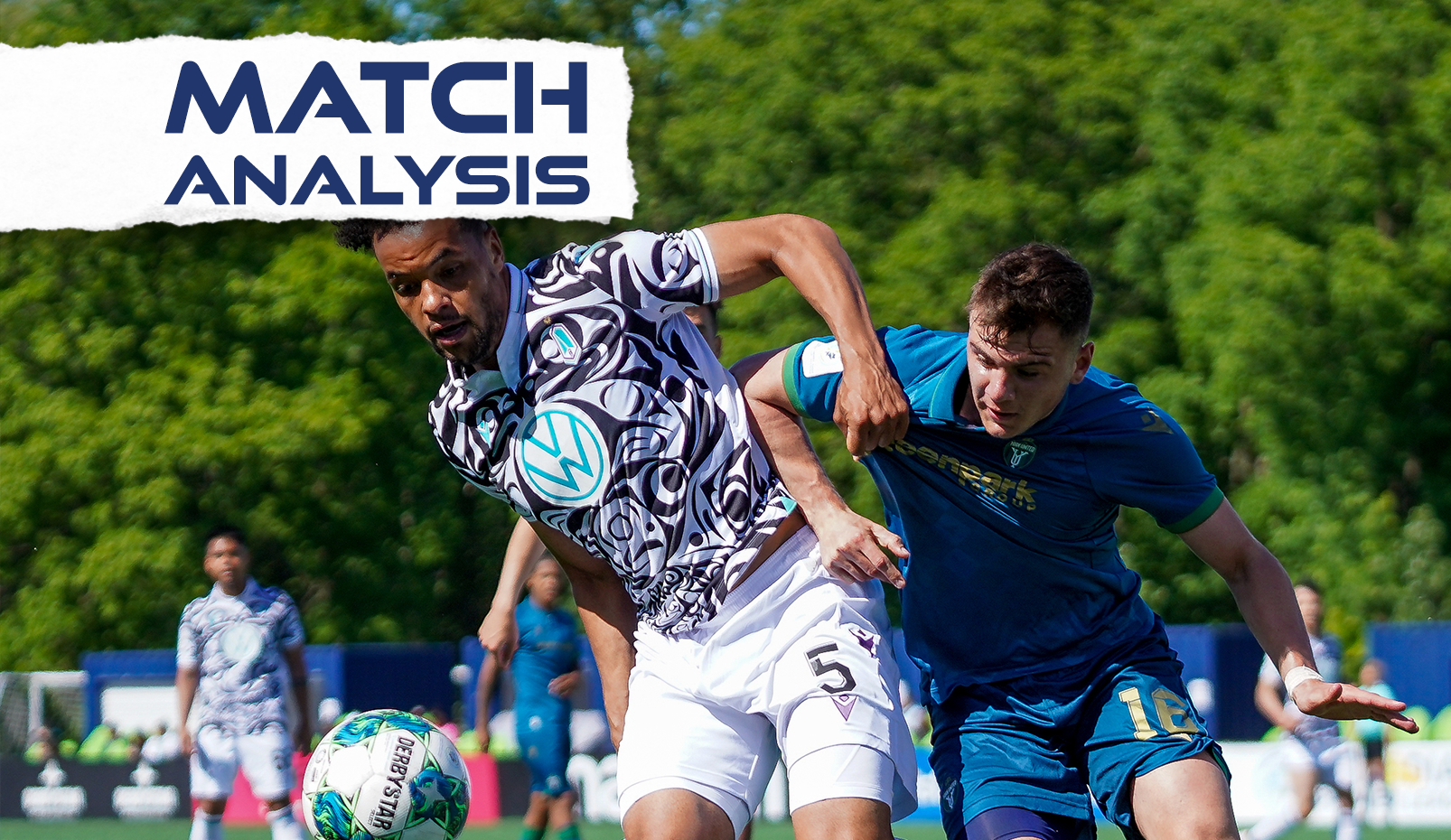 York United and Pacific FC battled to a 0-0 draw at York Lions Stadium on Saturday afternoon, as neither side seemed able to solve the other.

The visiting Tridents had a fairly heavy advantage in possession, though York finished with more shots thanks to some dangerous transitional play — including a few good moves from left-back Diyaeddine Abzi, playing his final home match for York before his move to Ligue 2’s Pau FC.

Ultimately, it was a second straight 0-0 draw for York, who continue searching for a goal ahead of their Canadian Championship tie with Vancouver Whitecaps.

As is, almost always, the case in a 0-0 draw, the story of this game was both teams’ ability to take away opportunities and space from the opposition.

The two backlines were comparably stellar from start to finish in this game, tracking opposing attackers very well and remaining well-organized and flat enough to prevent runs in behind.

Pacific’s centre-backs Amer Didic and Thomas Meilleur-Giguère were very composed on the ball despite York’s pressing strikers (more on them later); the pair finished with 124 and 135 touches of the ball, respectively. Didic’s passing accuracy was a sparkling 96%, with Meilleur-Giguère’s just behind at 92%. The eight clearances between them made a difference, as they they prevented at least a handful of very dangerous quick transition plays from York. Out wide, Abdou Samake was excellent defensively playing left-back; he won all five of his attempted tackles, playing a difficult role marking Max Ferrari.

At the other end, the onus was on York centre-backs Dominick Zator and Jordan Wilson to cut off Pacific’s attempts to pass into the box. Wilson won four tackles, and Zator had three clearances, as fullbacks N’sa and Abzi were similarly excellent defensively to prevent Pacific from moving forward too quickly.

In midfield as well, York make themselves very difficult to play against. Isaiah Johnston and, in this case, Mateo Hernández, formed a good partnership in the middle of the flat four across centre, preventing Pacific from playing through the middle and forcing them to go wide, where the fullbacks were capable of defending the dangerous areas. Certainly, there’s an excellent foundation in place across most of the pitch, with just the final piece missing.

“I think if you look from our first game of the season against Halifax to now, you can see that we’re really starting to come together, we’re starting to read each other and play more as a team,” said Johnston. “You can see that having very little chances created against us, very little goals scored against from; two-thirds of the pitch, we’re very good.”

York push Pacific back with pressure from 4-4-2, remain goalless

In a bit of a tactical shift from recent weeks, York boss Martin Nash put his side out in what looked mostly like a 4-4-2 shape, especially out of possession. With Max Ferrari finally able to make his return to the starting XI on the right side, Nash placed Osaze De Rosario and Lisandro Cabrera up front together with a two-man strike pairing. Ferrari’s return also allowed Mateo Hernández to return to his more natural central midfield spot.

The major benefit of this well-organized system was the cohesion of York’s press without the ball. De Rosario and Cabrera put immense pressure on Pacific’s centre-backs to make them rush their passes out of the back. The Tridents were frequently looking to play wide to either Josh Heard on the left or Kunle Dada-Luke on the right, but York fullbacks Chrisnovic N’sa and Diyaeddine Abzi kept tight to those wide players and were usually well-positioned to win duels along the touchline — particularly if the passes toward Heard or Dada-Luke were risky, ambitious efforts forced by York’s forward press.

In the second half, York backed off the press somewhat — Nash explained he dropped his line deeper on purpose — and Pacific took a heartier share of possession (more than 60% in the latter frame). The game opened up somewhat as a result; York sought longer balls to spring counter attacks, and Pacific developed a few counter-pressing chances as a result, though the two teams still struggled to unlock one another.

“We put in the work, (but) I think we disconnected a little bit and they were able to play through it,” Nash explained. “We did turn it over a few times and just didn’t take advantage of the turnovers. So we ended up dropping the line deeper in the second half and giving them the ball a little bit more, and I think it worked for the most part, but maybe we tired out at the end and held on a little bit late.”

It’s now four games in a row that York have not scored — six in CPL play, with their most recent goals coming in the 2-2 Canadian Championship match against Pacific in late May — and they had just one shot on target in this particular contest (1.28 expected goals, though; far more than Pacific’s 0.06).

“I think someone’s put a lid on the net,” Nash quipped. “I think it’s been four games since our Cup game with Pacific, so it’s been a few games — but to be fair, in those four games we were able to get two draws out of it without scoring a goal. It’s tough times, the guys are frustrated, but they’re battling through. They’ve got a great mentality, this group; I think once we score one, the floodgates could open and just give us that little bit of confidence.”

Last weekend at Forge, Pacific’s entire front three struggled significantly just to get on the ball; Marco Bustos, usually the talisman of the attack, was held without a shot in that match and had just 35 touches, one of the lowest figures among his team’s starters.

This time out, Bustos was focused on finding the ball himself, dropping into various pockets all over the pitch to get involved in the buildup play earlier than he might normally. Nominally lined up in his usual right wing position, Bustos covered acres of ground all over the attacking half especially; he often dropped deep to spring quick give-and-gos with midfielders like Matteo Polisi, or he sometimes drifted centrally and took touches from a quasi-number 10 position.

The running did pay off, in some sense; Bustos had more than twice as many touches as he had in Hamilton, with 77 — sixth among Pacific’s starters but far more than either of his fellow attackers in the front three, Josh Heard and Alejandro Díaz. Last week, it was Díaz who dropped deeper into midfield looking for touches, which left the Tridents without a central prong in the attack at times; this time, Díaz usually remained higher as Bustos cut inside more to try and find him with the ball.

Bustos’ heatmap for the match is below; of course, the majority of his work came in the right wing and half-space areas, but the blue shadows all over the pitch demonstrate just how wide-ranging his running was.

Bustos, undeniably a top player in the CPL, will probably not be satisfied with his start to the season, though it’s matches like these where — even though the goals or assists aren’t falling — his quality and intelligence as a footballer are evident. He made 17 passes in the attacking third (more than anybody else in the game), he won the ball twice in the attacking third, made four crosses, and had two shots on target.

Certainly, this was a much more encouraging afternoon for Bustos and for Pacific compared to last week at Forge, though still not quite the fluid, lethal attacking football they displayed at home earlier in the season.

Pacific boss James Merriman explained postmatch that Bustos’ increased involvement was a byproduct of Pacific spending more time on the ball in general, and he added that his side did far better this week at retaining possession and working it further up the pitch — it’s just the final piece, the last pass toward a run in behind, that remains to be found.

“I think that’s what happens when we’re building more and we’re on the ball, we’re able to get into the front three and get Bustos a lot more touches,” Merriman added. “I think Matteo Polisi got a lot more touches playing the ball into Diaz, but we need that second movement to progress now into the final act. Maybe we can be a bit more aggressive; there again today, the wind was for sure a factor but it was good. I was very happy with the first half and then we took too long to find a rhythm in the second half, we let ourselves down.”

Meilleur-Giguère commanded the ball in this game — as did his partner Amer Didic — and did very well tracking back to defend York’s transitional attacks. He won five of six duels, adding five clearances and two interceptions, with a team-high 135 touches and 113 successful passes.

Before then, though, York will head to Vancouver midweek to take on Whitecaps FC in the Canadian Championship semifinal on Wednesday (7:00 p.m. PT/10:00 p.m. ET).