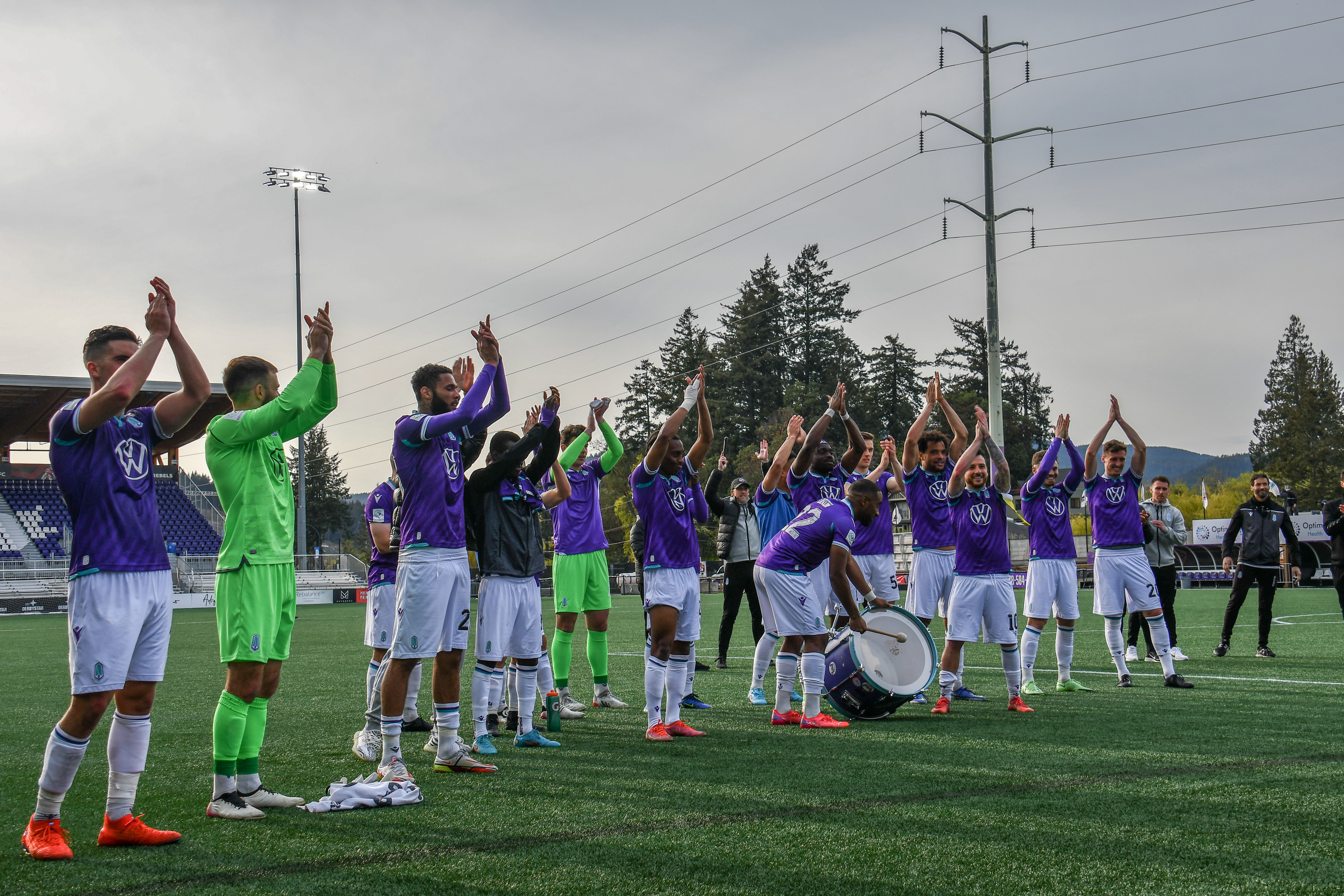 The players celebrate with the supporters after the club's last home match on April 23 (Sheldon Mack/Pacific FC)
Match Preview – Pacific FC v FC Edmonton: Tridents continue to lead the league as the club returns home for the rest of May
May 13, 2022
by
Jack Longo

Pacific FC returns home in top spot despite a lone victory on their recent three-match road trip. Their opponents tomorrow, FC Edmonton, arrive at Starlight Stadium having struggled after a lively start to the season that included holding Pacific to a 0-0 draw in Edmonton as part of the Tridents’ road trip. Having been shutout in that match a few weeks ago, Pacific will look to make a statement on their return home and put on a show for the home crowd on Saturday.

Although the club gained just four points from a possible nine on their road trip, Pacific continues to set the pace at the top of the league. The Tridents put in a memorable defensive display last weekend against Atlético Ottawa – led by the stellar performance in goal by Callum Irving, and now return to the Island for the rest of May. Pacific are currently five points clear of second-placed York United FC, although York has a game in hand.

Edmonton on the other hand have struggled since their promising start and now sit bottom of the table with three points from six games. The Eddies’ last two matches have come against their Alberta rivals Cavalry FC, a derby in which they have never had much success since the CPL’s inception, and an upturn in confidence will be needed to stop the slide they find themselves in.

After the 0-0 draw last time these two teams played, this matchup is now perfectly split all time. Four wins a piece and four draws in 12 previous matches means there is nothing to separate these two clubs throughout their short histories in the CPL.

In regard to matches played on the Island, the record sits at two wins for Pacific, one win for Edmonton and one draw. The last match t0 be played here between the teams ended in a 5-1 victory for Pacific.

“We’re going to continue to build on what we’ve done over the last the first part of the season here. So we’re in a good way – we’re confident with the way that we are playing and how we are going about things. (This is) another opportunity for us to continue to grow and develop our style, so we’re looking forward to the match.” – James Merriman (h/t CanPL.ca)

Two big, strong centre-backs who perform plenty of defensive actions and look to show their ability on the ball whenever possible. Didic though is a much more accomplished player, while Singh is still developing and has been thrown in the deep end as part of his loan spell with Edmonton.

Didic has been an incredibly important piece of Pacific FC’s new-look backline this season. Aerially dominant and smooth in possession, Didic’s arrival allows Pacific to continue to play out from the back, but also makes them difficult to break down when they choose to drop back. Singh on the other hand has joined a FC Edmonton team in transition that requires its defensive unit to be the best part of the team as they often sit deep and force teams to play against a compact unit. Singh has had a lot of work to do already this season, but he should go back to Toronto FC as a better player overall for his experience.

Pacific have been the best team in the league to this point, I don’t think there’s any disputing that. A five point lead at the top of the table and a chance to extend it on Saturday points to a side playing with plenty of confidence and trust in each other. Despite only coming away with one road win on their hard-fought road trip the Tridents can lean on their perfect home form as a major reason they sit top.

As mentioned, the visitors on Saturday began the season brightly and have showed plenty of fight despite the difficult position the club is in. Edmonton is an incredibly young team that brings energy every match but has struggled to maintain a foothold in their recent run of fixtures.

Looking at the standings, it’s top vs bottom and could seem like an easy match for the home side, but Pacific can’t get too ahead of themselves as this Eddies team still has the ability to cause an upset.

As the home side, Pacific really need to take the game to Edmonton. The supporters will expect to see this team attack with purpose and put the Edmonton defence under lots of pressure. The Eddies have solid defenders, but they can be broken down by quick movement and teamwork.

Although not absolutely necessary when you’re already top of the league, now is the perfect time to make a statement as you return home.