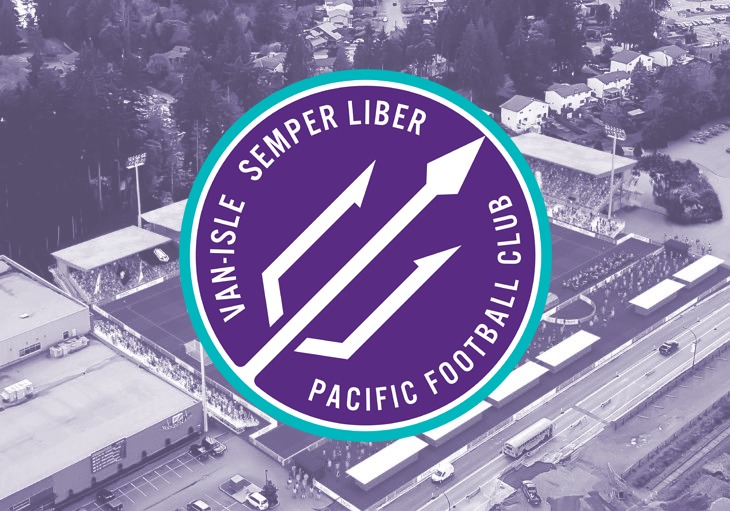 Vancouver Island – With the inaugural season of the Canadian Premier League (CPL) quickly approaching, Pacific Football Club’s secondary logo is now officially on full display. The secondary logo compliments the club’s main crest and features the trident and colours that capture the culture and philosophy of Vancouver Island’s club.

The primary object within the secondary emblem is that of a trident. Traditionally, the trident has been used for spearfishing. It also is a mythological symbol for having control of the ocean. The symbolism dates back to Greek mythology when Poseidon used his trident to create water sources in Greece.

“As Vancouver Island’s club, we wanted to incorporate a symbol that captured and conveyed a sense of strength and community,” explained president Josh Simpson. “We are embracing the Island culture and wanted to find a symbol that would speak to that.”

The trident exemplifies the strength and courage of Vancouver Island, as well as the fierce weather that can be attributed to the Pacific Ocean. The Pacific has shaped the Island, its players, and the people that come from its shores.

The colours of the secondary crest include Starfish Purple, Lagoon Blue, and Lighthouse White. Starfish, once under threat by a severe epidemic, battled to survive and thrive in the Pacific Northwest. Blue Lagoon encapsulates the logo and represents the Pacific Ocean that wraps Van-Isle and shapes so much of the Island’s beauty. Lighthouse White is inspired from the many lighthouses that surround the Island and continue to work to this day.

In discussion with a number of focus groups throughout the Island, Pacific FC’s management team discussed what symbol resonated with the Island community. The common thread came down to the ocean that surrounds the Island, inspiring the colours and the creation of both of the club’s logos.

The words circling the roundel include Van-Isle, Pacific Football Club, and the phrase ‘Semper Liber’ which translates to ‘Forever Free’. This motto describes the freedom and culture that Vancouver Island was built upon.

“Our strength is within our community,” concluded Simpson. “We are excited to roll out our alternate logo. The culture of the Island is unique and our logos are key pieces to our club’s identity.”

ABOUT PACIFIC FOOTBALL CLUB
Founded in 2018, Pacific Football Club is bringing professional football to Vancouver Island. Playing out of a renovated, 6000-seat Westhills Stadium in Langford, the club will provide an outlet for Canadian youth to realize their dreams of playing at the professional level. Fans will be able to enjoy the thrilling, fast-paced sporting atmosphere associated with the sport when the Canadian Premier League season kicks off in April, 2019.

Pacific FC is accepting membership deposits ahead of the CPL’s inaugural season. Visit PacificFootball.Club for more information and CanPL.ca for the latest CPL news.