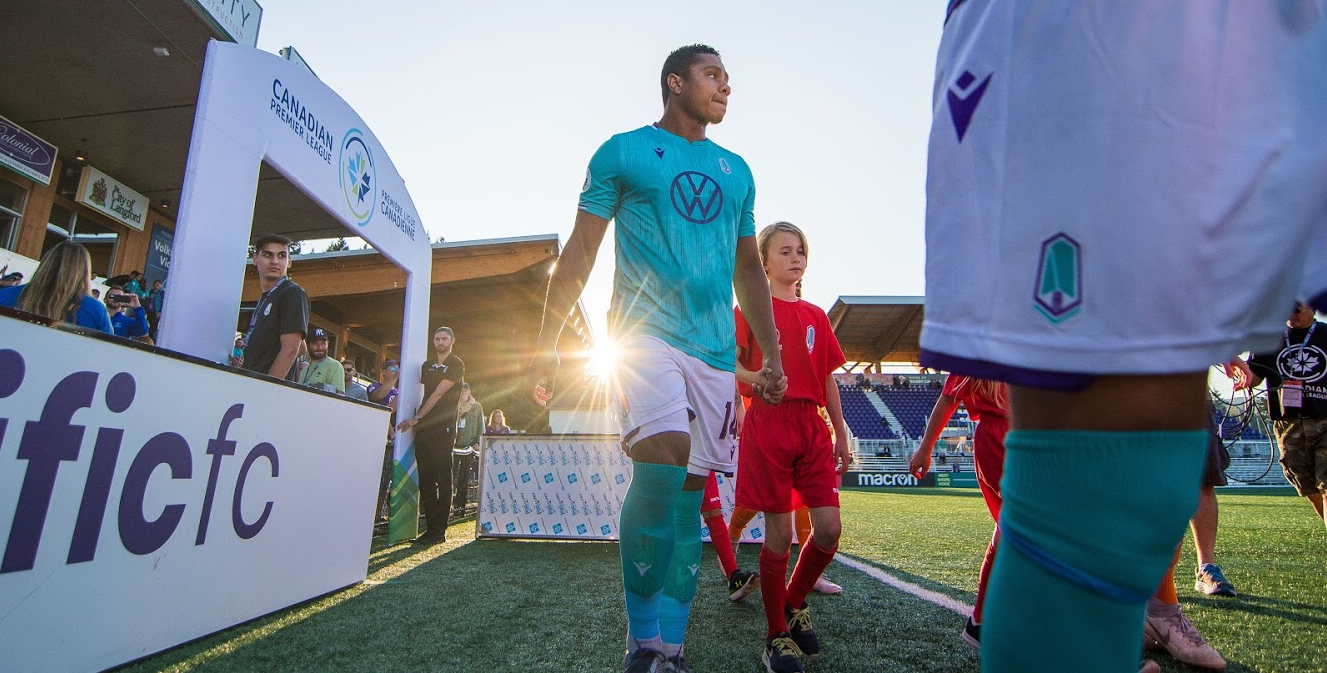 Vancouver Island – Pacific FC forward Terran Campbell was one of the many stand-out young players of the CPL inaugural season. The 21-year-old was nominated for best young player of 2019 on the heels of an incredible CPL campaign. Playing more than 80 minutes in 16 of 18 games, collecting a staggering 2,436 minutes as an under-21 player, Terran Campbell proved a workhorse – and his 11 goals show it. Using his strength and positional awareness, the Burnaby native was one of the hardest attackers to mark in the league.

“Coming into the season I didn’t expect to play such a big role for the team, I was more focused on working my way into the starting line up,” commented Campbell. “As the season went on, I found myself in the starting lineup consistently. I was able to help the team and myself out by scoring goals for the club.”

“My first goal for Pacific was a really exciting moment for me,” stated Campbell. “I was really happy to contribute and get on the score sheet and that led to a lot more confidence in front of goal.”

Before joining Pacific FC for the inaugural season of the Canadian Premier League, Campbell came up through the Whitecaps’ academy and appeared in games with Whitecaps FC 2 and USL Championship side Fresno FC. He appeared for the Canadian national team at the U-17 level as well.

“Being a young player at Pacific has meant a lot,” stated Campbell. “I think over the course of the season and with the trust and belief the club has in all of us young players, it’s allowed us to develop ourselves into the professional game as well as showcase ourselves. What helped me the most was just the belief and trust the club put into me.”

The left-footed forward exemplifies what Pacific FC CEO’s Rob Friend has been looking to create since day 1 with the CPL as a platform. It is a league that gives an opportunity to the young talent in this country, giving a pathway to Campbell and Co. to show the world that they have what it takes to reach this level.

“Pacific FC has been a big part of the growth in Canada soccer and especially in B.C.,” added Campbell.  “There is now a home for local players who want to make it into the professional game and start their careers. Pacific has given me the opportunity to do so and I’m truly grateful for it.”

The focus on youth has seen a learning curve and a lot of growth that will be on display heading into the 2020 season, with the youngsters full of professional experience following the inaugural season.

“I think next year will be an exciting time for the Vancouver Island soccer community,” said Campell. “Having chemistry and getting professional minutes for all of us young players, has played a big role for us going forward. Having played together this past season we’ve learned a lot about what it takes to be a great team or an even better player yourself. I think next year will be a fun one.”

In addition to leading the goalscoring charts for a few weeks across the league, Campbell made some history as the first player in CPL history to hit double digits with his 10th goal scored against Forge FC in front of a Westhills crowd. Campbell pointed out the amazing support from the Vancouver Island community as a key factor in the forward’s success.

“The Vancouver Island community has made me feel at home in Victoria, the fans are absolutely amazing supporting us rain or shine,” added Campbell. “The community here is very kind and friendly and it’s always nice when someone recognizes you and goes, ‘that’s Terran Campbell.’ Just having someone give you recognition like that is a really good feeling and puts a smile on your face.”