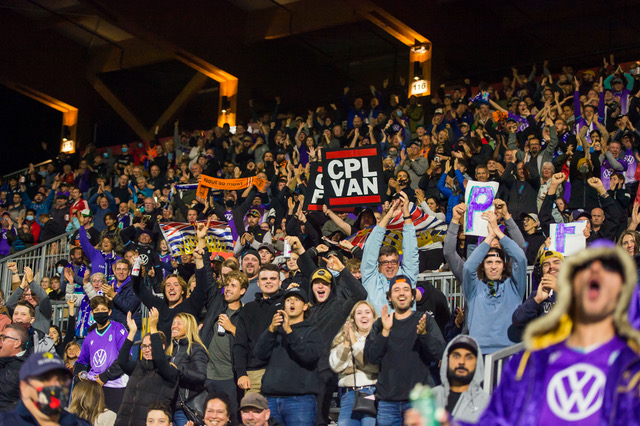 On Wednesday, Pacific FC will walk into BMO Field knowing they’ve already produced the most remarkable upset in Canadian club soccer history and have the opportunity to do just that again.

Pacific’s cup run in 2021 has provided supporters and players with unforgettable memories as well as some optimism heading into the semifinal against Toronto FC.

“It was one of the most unforgettable nights of soccer of my entire life,” says Michael Geldreich, President of the Lakeside Buoys, of Pacific FC’s 4-3 victory over their mainland BC rivals Vancouver Whitecaps FC in the Canadian Championship.

“It’s really surreal for me because it was one of those things where a lot of planning and time went into it. I mean, I had the whole day off work. It’s like throwing a giant party or a wedding or something like that where, when it’s over, you just have to remind yourself at times in the evening to absorb that this is happening right now.”

“For a lot of people it was an unbelievable, unforgettable evening of soccer where we were some of our loudest as a supporter section. It was unreal that the place was sold out. You could really get the sense of a home field advantage at that game.”

Geldreich sees Pacific’s cup run and the opportunity to play bigger, more established clubs as incredibly beneficial for soccer on the Island and in the country as a whole.

“Those are the stories that get people’s attention. Around that Whitecaps game, I had two radio interviews and two TV interviews. It’s the kind of thing that all of a sudden people come out for. And obviously if we beat TFC that the same thing would apply. It would be unreal if PFC (made it to the final) and then beat the three MLS teams in the same season. That would put, not only obviously our club, but the league on the map.”

Blake McStravick, another member of the Lakeside Buoys supporters group, believes the club’s victory over the Whitecaps was a turning point for the club.

“It was a watershed moment for PFC in the Island sports landscape. It made people stand up and take notice. Gone are the days when no one knew who this team was.”

And if Pacific is able to repeat the trick in Toronto on Wednesday, it would be more than the supporters could have possibly hoped for.

“It would be unreal,” says McStravick, “a pinch-me moment. It was already more than we dared to hope for to beat the Whitecaps, so to take down TFC would be a dream come true.”

Like probably all Pacific FC supporters, Geldreich is looking forward to the match against TFC but is upset the game won’t be played on the Island.

“It would be amazing (to beat TFC). I’m not even sure what to say more than that. It would be unreal to have that. It’s a bummer that it’s not happening in Langford of course, because if that happened, we would’ve had a pretty good advantage.”

“It’s hard to talk about what it would mean to us and what we can do about it, unless it’s a home game. We’re all very excited about this game and maybe some people will gather together in a pub to watch it, but a lot of people still aren’t necessarily comfortable doing that. We know that people all over town will be watching it from their own houses but that’s not the same experience in any way.”

The atmosphere felt at Starlight Stadium during the victory over Vancouver was overwhelming, in a positive sense, and Geldreich thinks hosting another big cup match on the Island would’ve recreated that feeling.

“If it was happening at Starlight, I think it would be a very evenly matched game with the home atmosphere. But also, Toronto really needs this. This is their only lifeline to get anything out of the year. So I expect that they’re going to try and they’re not going to want to lose and give up on their home turf too easily. There’s a level of pride there. So Pacific’s got a hard case to win this game in Toronto, but could have really, really brought it to them if it was at Starlight. I’m still hoping don’t get me wrong, but it seems a lot less likely. However, even to lose against Montreal (in the final) at Starlight would be a thing. It would get people out because it’s a cup game. People will come out to see that.”

Matches against MLS opponents may stir up more excitement and intrigue from the outside, but the preparation involved is no different than usual for the players.

“We prepare for every game to go out there and win. Especially because of the quality we have as a team and the belief that we have that we can score and play well against anybody. Obviously there’s that extra bit of energy or heart that comes out because they’re considered to be a bigger team and have a bigger stadium and bigger players, but at the end of the day it’s one game, it’s 90 minutes, and basically your whole life you’ve been playing against bigger players or bigger teams.”

“I just think the emotions speak for themselves,” says Manny Aparicio, “that’s why you’re able to play in those kinds of environments. As a professional those are the types of games that you play for and you wait your whole career for; being able to get into a final, being able to beat tough oppositions and just being able to show yourself and everyone else that you belong there.”

“We know we have the quality as a team, we know we have the desire, so we’re going there to create another upset. I think more than anything I’m just excited for the game and trying to make history for us and for the CPL. We’re on the road right now to create big big things.”

Because MacNaughton spent his university life in Toronto he’s been to BMO field plenty of time before, but Wednesday will be his first visit as a player.

“I’ve watched so many games there,” says MacNaughton, “I’ve watched games where guys that I’ve now played with were in those games. I watched the Canadian Championship semifinal with Issey Nakajima-Farran playing for TFC and then I came to Pacific and I’m on the same team as him! At the time, I would’ve never thought I’d be playing in a Canadian Championship semifinal there one day.”

Don’t miss the Canadian Championship Semi-Final as Pacific FC take on Toronto FC at 4:30pm on Wednesday, November 3rd. Tune in at OneSoccer.ca on Channel 980 on Telus. Stay tuned to pacificfc.ca and follow the club on Twitter, Instagram and Facebook for the latest news.