Roberts, who grew up in Victoria and played for Bays United Soccer Club before spending time in the Van Isle Wave program, is now with the Vancouver Whitecaps REX program.

Pacific FC assistant coach and Van Isle Wave technical director James Merriman worked closely with Roberts’ and her family to help with the transition from the Van Isle Wave program to Vancouver. 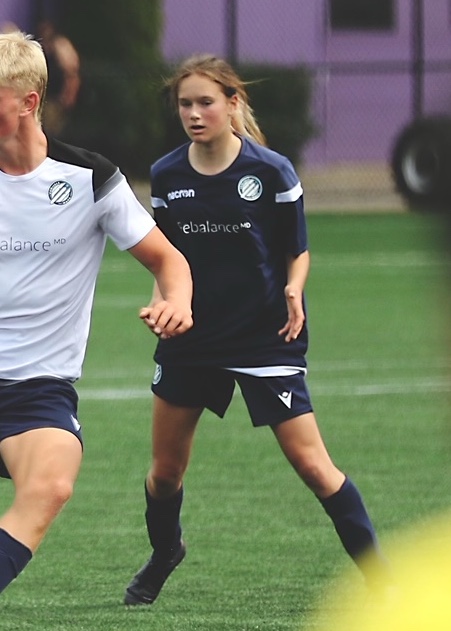 “I’m not surprised,” says Merriman, “getting to know Ashley over the time we’ve been involved with the Wave, she’s very dedicated, she’s very committed, she’s a talented young player with tons of potential. She worked very hard for this opportunity and deserves it.”

Merriman has been working closely with Roberts and her family for over a year and a half as they navigated how to keep Roberts involved in the Whitecaps REX program while being unable to travel to the Mainland due to restrictions.

“She started to get some interest in training with the REX program and being involved in Vancouver with the Whitecaps. Then Covid hit and it was really difficult for her and her family, she was kind of in between. She was training with us for the majority of the last year and a half with our ‘05-Girls team and ‘06-Boys team. Then we were able to help with the transition this fall when she moved over to Vancouver full time at the beginning of September. She’s been full time with the REX program since then, and now she just got called up to the Canadian U-17 national team so she’s currently in Mexico.”

“I just think, most importantly, it’s a great opportunity for her. She deserves it, she’s worked incredibly hard. It was pretty challenging and complicated in terms of ‘where do I train? How do I keep in touch with the Vancouver group when training on the Island?’. I’ve spent a lot of time with her and her family trying to make sure she was staying on pace with where she wanted to be and where she wanted to go. It’s just nice to see her get this reward.”

Roberts is the first former Van Isle Wave player to get a national team call up, and Merriman says she’s a great example of what can be achieved by Island-born players.

“She’s the leader and an example of someone who’s come into the Van Isle Wave and progressed into the REX program with the Whitecaps. We want to encourage more and more female players to develop in the Wave program and get opportunities in the REX program and ultimately the Canadian national team. That is the pathway.”

“On the male side it’s a bit different, we develop players for the BC provincial program, of course for the Canadian national program, and for us at Pacific FC. Obviously we don’t have that on the girls’ side, so the REX program with the Whitecaps is the goal. That or graduating from there and going to university or getting professional opportunities and Canadian national team opportunities. That’s the pathway that we’re really trying to encourage with the youth. That’s what we want. Ashley’s just a great example of that, she’s the first one since we’ve been with the program that’s gone through and made that step and then been called into the national team, so it’s a big success for her and for us.”

As technical director of the Van Isle Wave, Merriman wants to use Ashley’s experience with the program as a reminder of the opportunities available to both male and female players.

“The most important thing for me is that the Wave program is just an open door for players; females who have gone onto the Whitecaps program, and on the male side with the BC provincial program.”