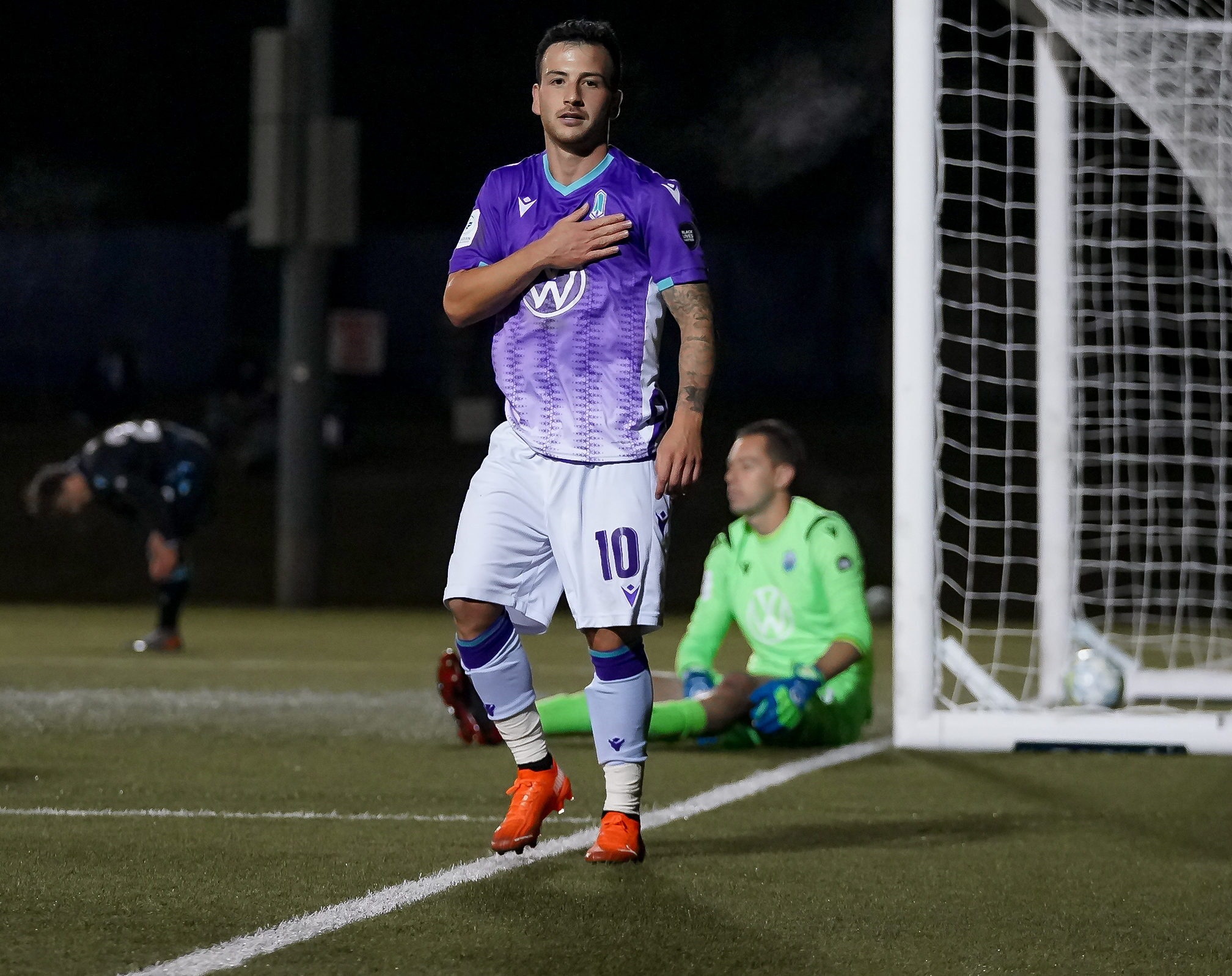 Marco Bustos. (CPL/Chant Photography)
Which CPLers could be in the running for a possible CanMNT camp?
October 29, 2020
Canadian Premier League
by
Charlie O-Connor-Clarke, CanPL.ca
News

If rumours are to be believed, the month of November could be an interesting one for the Canadian men’s team.

Recent comments by Rangers FC midfielder and Canadian men’s team member Scott Arfield suggest that coach John Herdman may be assembling a squad for a camp during the next international window (Nov. 11-19).

Fellow Concacaf nations have already announced similar camps and friendly matches, all to be based in Europe: the United States is headed to England, and Mexico and Costa Rica will both be setting up shop in Austria. If Canada is to do likewise, their camp would surely be overseas as well, since COVID-19 travel restrictions might prevent top players in Europe from going to North America for the brief one-week period.

For Canada, that would likely mean that MLS players won’t be available, especially for those on playoff-bound clubs, since the league has a mandatory quarantine for players returning from overseas. So, there would be no Jonathan Osorio, Richie Laryea, Lucas Cavallini, or Samuel Piette, among the host of other MLS-based Canadian regulars.

That factor could spell opportunity for some Canadian Premier League players, though. Many of them might have time to quarantine after a camp in Europe, with no CPL games scheduled. This could also be an opportunity for Canada Soccer to take an extended look at some younger players, who could be candidates for the under-23 Olympic qualifying squad (whenever that competition happens).

Which CPLers might have the best shot, though? Might it be those who have national team experience, but haven’t been in a camp for a while? Or perhaps those on the younger end, who may yet have a future as a regular?

Here are just a few possible candidates. Plenty of other players are worthy candidates as well — Chrisnovic N’Sa, Dominick Zator, or Callum Irving, for instance — but these six seem to make the most sense. Of course, we’ve counted out Forge FC players, on the assumption that they’ll be tied up with Concacaf League duties or quarantines thereafter.

Without Richie Laryea or Zachary Brault-Guillard available, Canada will be hurting a little for right-back depth. Frankly, it’s a position they need depth in, regardless.

Chung’s skillset could be a major boon to Herdman’s squad; he’s defensively responsible and very rarely loses a duel. In fact, he was among the best in the CPL at The Island Games in terms of winning 50-50 balls and beating defenders. He can cross a ball well, and he’s good on the overlap.

Plus, the 22-year-old Chung seems likely to be a major piece of the Olympic squad after his breakout Island Games. He has plenty of experience with Canadian youth international teams, playing at the Concacaf U-17 and U-20 Championships, and attending camps at the U-18 and U-23 levels as well.

The Eddies’ big centre-half has attended four camps for the senior national team, including the most recent (last January in California). Although his 2020 CPL campaign was marred by an unfortunate injury, Didic remains perhaps the most imposing centre-back in the league. His huge frame, coupled with dominance in the air and a very sharp ability on the ball, allowed him to slot comfortably into Canada’s backline against Barbados and Iceland.

Didic made a good impression in January, scoring a debut goal against Barbados. With Derek Cornelius probably out for this camp (and the availability of Doneil Henry, based in South Korea, uncertain), Canada could make good use of Didic and keep him engaged with the national team program. He could well be a regular part of the setup in the near future, considering Canada’s depth at the position, so the six-foot-four defender would be a pretty safe bet to make a possible November camp.

Canada’s going to need a goalkeeper. Milan Borjan remains the number one, of course, but the de facto number two, Maxime Crépeau, is in MLS with the Vancouver Whitecaps. If everyone was available, the likely third right now would be Dayne St. Clair, who’s broken out this year with Minnesota United, but again: MLS. Same goes for James Pantemis, who arrived back in Montreal from Valour FC and started three games.

Carducci hasn’t yet made his debut for the senior national team, but he’s been in three camps, including two in 2019, and he was apparently set to be called up again for the March 2020 camp that was ultimately cancelled. He’s played at the FIFA U-17 World Cup and the Concacaf U-20 Championship, and he’s made a good impression on Canada Soccer in his young career. Although Carducci is too old for the Olympic team, he’s got a chance to be part of the future for Canada.

Although he didn’t get as much of the spotlight at The Island Games as he did in the inaugural CPL season, Carducci was very solid in goal for Cavalry in 2020.

Just to have a little fun.

Think about it: Not only will Canada be missing MLS players in November; they’ll almost certainly be missing the injured Alphonso Davies as well. Canada could, therefore, use another attack-minded fullback like Farsi to fill a tactical hole.

If Herdman’s plan for Davies in the future is to use him as a wingback or some sort of wide two-way linchpin, then the team’s tactical sessions and match preparation would be less impacted by Davies’ absence if Farsi could stand in. By no means is Mo Farsi anywhere near the level of Alphonso Davies, but he does play with a similar mindset, and thus could be a useful tactical player for Herdman’s squad.

Plus, the 20-year-old would be a fantastic piece for the Olympic qualifying squad. Farsi was one of the most exciting CPL players in 2020, and his potential is something Canada Soccer will want to harness.

Another one for the future. Meilleur-Giguère proved in PEI that he’s extremely confident and comfortable in defence for a 22-year-old. He can move the ball well, and he rarely gets beaten by attackers.

Canada should probably be in the business of developing any and all young centre-back prospects, and TMG might be chief among them right now. It’s important to get him into the national team setup as quickly as possible, and this would be the perfect opportunity to do so.

Meilleur-Giguère has been around the block a few times with national youth teams, but if he’s brought into the senior team early, then Canada’s transition away from retiring centre-backs will be less painful in the future.

Bustos should still be reasonably sharp in November, with Pacific still in training. Canada will be missing a lot of its attacking punch without Davies and Cavallini, among others.

Seriously, why not? There would be no harm in Herdman giving a chance to arguably the CPL’s best Canadian attacker. He’s already got six caps (although he hasn’t appeared at a camp since 2017). Surely Bustos showed enough in his Island Games campaign to warrant a call-up?

It would be fun, and we’d certainly love to see it.