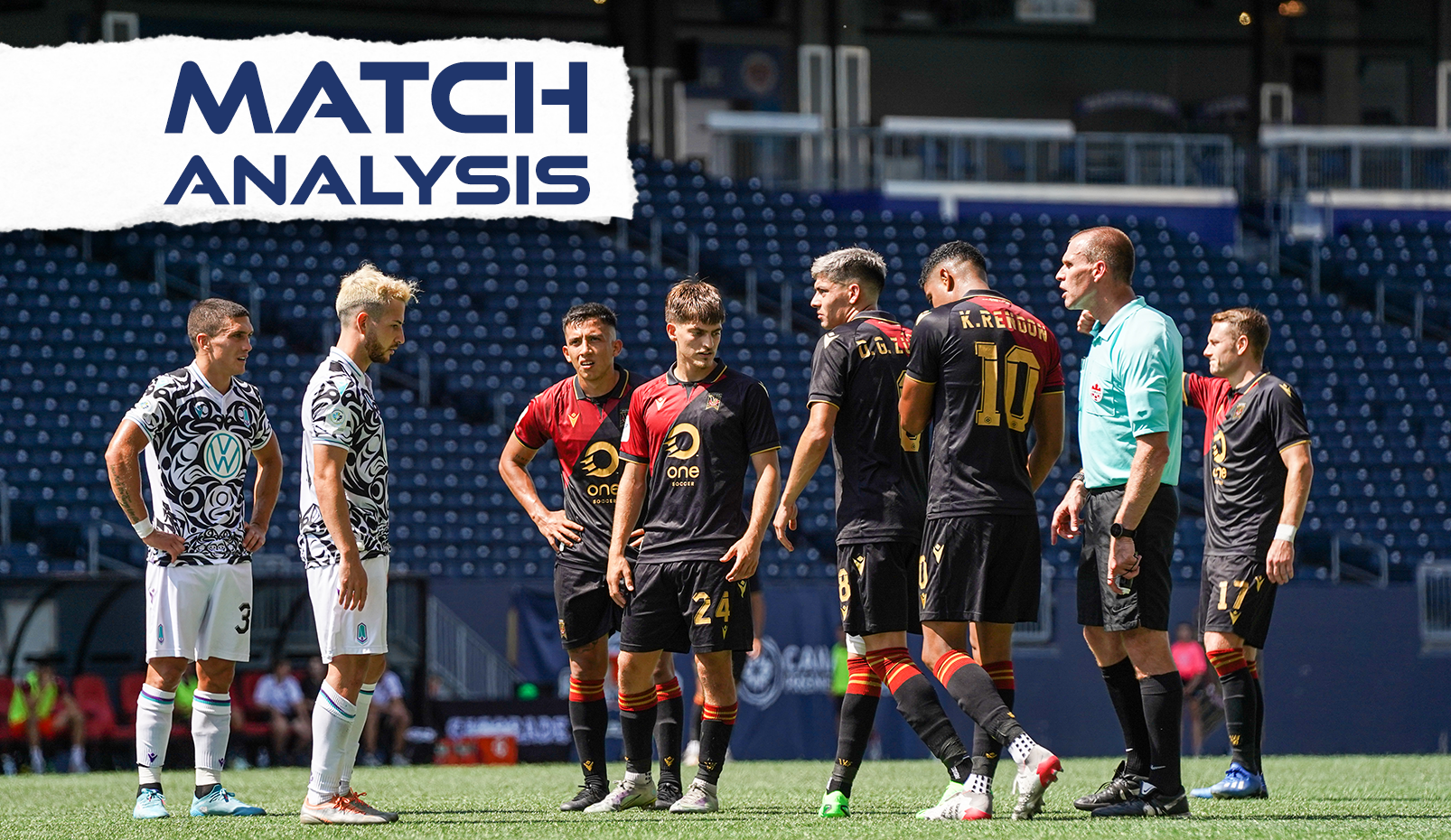 Valour FC dominated the reigning CPL champions for the first hour of Saturday’s match at IG Field but an inability to put the game to bed left the door open for Pacific’s impressive second half comeback.

The home side took a 1-0 advantage into the break, thanks to a header from Matteo de Brienne, his second goal of the season on his first start. It gave them a well-deserved lead, and for the next fourty minutes they showed no signs of letting that lead slip. The momentum shifted in Pacific’s favour in the 62nd minute, as Valour went down to ten men, with Daniel Ascanio being shown a second yellow card for what the referee viewed as a dive in the penalty area.

From there it was the Alejandro Diaz show, as the CPL’s Golden Boot leader scored his 12th and 13th goals of the season within two minutes of each other, earning his team a 2-1 victory. The first was a glancing header following a cross in from Marco Bustos, and the second was a tap in at the back post after a hard pass across the box from Kamron Habibullah.

Pacific jumped back up into first place with the win, while Valour remain eight points out of a playoff spot, with fourth-place Cavalry set to play later in the day on Saturday.

Phillip Dos Santos’ Valour FC side knew that this was a very important match in their pursuit of the playoffs, but after a dominant first 60 minutes, failed to pick up three points.

Entering the day’s action eight points back of Cavalry FC, with the Calgarians set to play later in the day against FC Edmonton, Valour needed to start making up the points. The only way to sneak into the top four, a group who are slowly but surely pulling away from the teams below them, is to beat them.

Pacific, who were in a three-way tie for top spot on points, have earned a three point lead over Forge FC and Atlético Ottawa, and are the first team to reach 30 points this season, now up to 32. With Cavalry set to visit IG Field midweek as well, it’s an opportunity lost for Valour to put the pressure on the teams above.

What makes the result even more disappointing for Valour is that they were the better team by a significant margin until Daniel Ascanio was sent off in the second half. On a yellow card already, the Valour attacker was given a second yellow for an alleged dive in an attempt to win a penalty.

To that point it was all Valour. Matteo de Brienne gave the home side the lead in the 23rd minute, and Valour had several chances before and after the goal, but only had the narrow one-goal advantage. Pacific’s attack was invisible in the first half, but Valour couldn’t take advantage.

“The first half says a lot, we were going toe-to-toe with the defending champs, a team that is obviously competing for the championship again,” said Valour captain Andrew Jean-Baptiste. “They came to our home and we put up with them, we looked like the better team out there for so many aspects of the game.”

Jean-Baptiste is correct, Valour did look like the stronger team for the majority of the match, but an elusive second goal never came.

It took two minutes of magic from Pacific for the match to totally turn around, as Alejandro Diaz scored twice in 2:01, turning a one goal deficit into an unlikely lead. Marco Bustos also picked up an assist with a cross on the first goal as The Tridents’ attackers flipped a switch and won their team the match.

For Valour, every match is important down the stretch, according to Dos Santos.

“You can’t do more than what we did today under normal circumstances. While we have energy and legs to go, we’ll go until the end.”

With his two-goal performance on Saturday, Pacific FC striker Alejandro Diaz is on the verge of making Canadian Premier League history.

The goals were numbers twelve and thirteen on the season, leaving him one back of Joao Morelli’s fourteen goals a season ago. That tally remains a single-season record in the CPL, but if Diaz can keep scoring at the pace he has been, he’ll smash that record and possibly break it this month — with The Tridents next taking the pitch on August 13 in CPL action, when they host Atlético Ottawa.

Thirteen goals in eighteen games is a rate of just over 0.72 goals per game, a sensational pace, and over a full 28-game season that translates to 20 goals, a mark previously thought unrealistic.

Bustos➡️Diaz and it is all level in Winnipeg 👀 @Pacificfccpl #CanPL

“I’m happy for that,” Diaz said when asked after the match about closing in on the record. “Honestly, it’s [all because of] the teamwork. I just have to say ‘thank you’, and we keep pushing and hopefully we can score more goals as a team, and to be one of the most teams.”

If that isn’t enough, Diaz is also now one back of the CPL’s all-time record for goals. Former Pacific teammate Terran Campbell, now with Forge FC, has 27 goals under his belt, while Diaz now has 26.

Diaz is extremely intelligent both on and off the ball, and the 26-year-old possesses an ability to constantly get himself into good positions. When you’re always in the right places at the right time, teammates can rely on you to finish off whatever chances they create, as seen on Saturday.

Diaz and @Pacificfccpl come all the way back and take the lead against 10-man @ValourFootball! #CanPL

Both sides give opportunities to players, and have their faith rewarded

Partly due to necessity, both Valour and Pacific made some changes to their starting lineups for Saturday’s match, allowing players who haven’t had many opportunities a chance to get some minutes under their belts.

With Valour’s leading goalscorer Moses Dyer suspended for this match, and fellow attacker Walter Ponce out of the lineup, a first start of the season was handed to 20-year-old Matteo de Brienne. De Brienne had made nine appearances before Saturday’s match, all of them off the bench, for a total of just over 100 minutes, but added 66 more to that tally against Pacific.

More often deployed as a winger or a fullback, de Brienne started this match as a striker, playing in attack with Daniel Ascanio, Kévin Rendón and Sean Rea.

De Brienne would reward Phillip Dos Santos’ faith in him, scoring the match’s opening goal in the 23rd minute. After a Daniel Ascanio shot was saved by Pacific goalkeeper Emil Gazdov, de Brienne was there to head the ball home and give his team a deserved lead. The 20-year-old celebrated his second goal of the season with an impressive front flip as well.

“He works, the kid is honest, the kid is committed,” said Valour head coach Phillip Dos Santos. “He deserved the goal.”

Front flipping into the lead! 🏃🤸🏻🏃

Gazdov himself was getting a rare opportunity, making his CPL debut for The Tridents. The 18-year-old originally signed with Pacific FC in 2020 from the Vancouver Whitecaps youth setup, but went on loan for two years at FC Nürnberg in Germany, playing for their under-19 team.

He finally made his CPL debut on Saturday, and looked sharp. Callum Irving had played every minute of the season for The Tridents thus far, but with a Concacaf League match against Waterhouse FC on Tuesday, head coach James Merriman opted to give Gazdov his first crack at professional soccer.

The teenager was busy, making seven stops on his debut, including a crucial one late in the match to deny a potential equalizer off the boot of Alessandro Riggi. It was a very solid performance, and one he can definitely build on the next time he gets an opportunity between the sticks.

“I thought Emil was excellent for his debut,” said James Merriman. “He was heavily tested, maybe a little nervy to start the game, but found his way, grew into the game. In the second half he showed a lot more confidence I thought. His saves, on the ball, decision-making. He’s got a big potential, and so I’m very happy for him.

“He’s been working hard all season long. We have Callum Irving, who’s an excellent goalkeeper and role model, and he’s worked with him every single day. I’m really happy for Emil and the way he performed today.”

The CPL’s Golden Boot leader had a quiet first half, but two goals in two minutes earned The Tridents all three points.

Valour FC remain at home, hosting Cavalry FC in another match with playoff implications on Wednesday, August 3 (7 pm CT/6 pm MT). Pacific turn their attention to the Concacaf League, and will host Jamaican team Waterhouse FC in the second leg of their Preliminary Round clash at Starlight Stadium on Tuesday, August 2 (7 pm PT/10 pm ET).