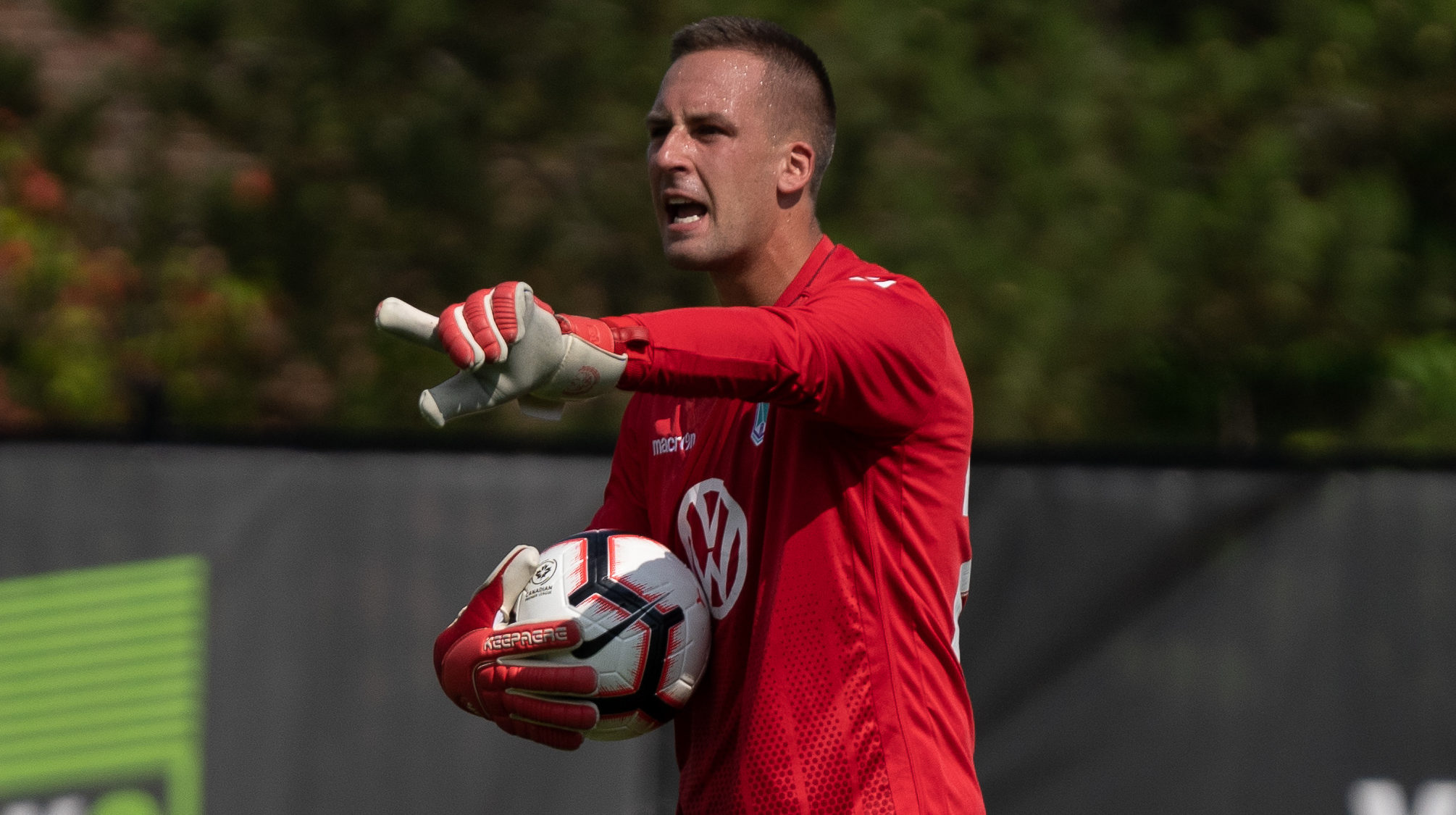 VANCOUVER ISLAND – The phone call happened in the quiet of the off-season, a chat between Mark Village and Nolan Wirth.

Teammates and first-team goalkeepers for Pacific FC during its inaugural season, the call wasn’t unusual on its own. What was different this time was the question Village posed to his former teammate: how would Wirth feel about Village returning to Pacific – not as a player, but as a coach?

It’s a question, in many respects, Village had to ask himself: keep playing (perhaps elsewhere) or stay put and switch roles? So much of professional soccer involves moving around. What happens when you’ve found a home? When is it time to put down roots?

“I kind of went back and forth,” the Abbotsford native told CanPL.ca of his decision to retire as a player and stay with Pacific as the club’s new goalkeeping coach.

Released by Pacific last November, Village would have been free to explore offers across the Canadian Premier League and beyond.

“I’m still only 28 – I’m still young, and I feel like I still have a lot of youth left,” Village said. “But it’s also one of those (situations) where I see this club growing, and I see where they want to go.”

Ask his former teammates, and it’s not entirely a surprise that Village would become a coach.

“He’s kind of like the team dad,” Wirth told CanPL.ca last April. “He’s the sheriff. When it comes to fines, if you’re late for a meal, if you’re this (or that), he’s the guy that you pay.”

The potential for a new role for Village was evident to Pacific co-owners Rob Friend and Josh Simpson, too. Through the off-season, the two floated the idea of him coming back.

For Village, the decision was sealed when Pa-Modou Kah came on as the club’s new coach. The two knew each other well from their time with Whitecaps FC 2, where Kah served as player-coach in 2016-17, and FC Cincinnati, where the Norwegian joined the club’s scouting staff in 2018.

“Having Pa there, he’s given me full reins of the goalkeeping position, so it’s pretty exciting,” Village said. “It’s (been) a really good transition for me, just because Pa has given me that confidence.”

One could imagine some initial awkwardness for Village, switching from player to coach. The chain of command is different, the chemistry altered. Hence the pre-season phone call between Village and Wirth.

“I kinda said, ‘Hey, this is where I’m maybe going, and I just want to let you know that this is a possibility.’ And he was nothing but excited for me,” Village recalled. “He said, ‘You know what? That’s awesome.’”

In 2019, Village and Wirth learned under goalkeeping coach Marius Røvde, but only part-time; the Norwegian, still living in the Lower Mainland, would commute by ferry. Village will serve as Pacific’s first full-time goalkeeping coach – a difference he stresses is “massive … just to have that consistency of someone there.”

For his part, Village has already seen strides in Wirth’s off-season development. Last year, the Comox-raised ‘keeper finished fourth in saves in the CPL (59), but also let in the fourth-most goals (24).

“I think his mental side is growing,” Village noted of his former teammate. “He’s really worked on that.”

He’s impressed, too, with newcomer Callum Irving, brought in this off-season from the now-defunct Ottawa Fury.

Beyond his duties with the first team, Village also heads the club’s Trident Goalkeeper Development Program, mentoring young ‘keepers from Greater Victoria and beyond. More than that, he’s preparing for his busiest role yet: that of a first-time father – he and his wife Caitlin are expecting their first child in late April.

“To stay in B.C. with my family growing here, it was just pretty attractive for me,” Village explained. “We’re setting up our home for a little one coming in, so it’s going to be even more of a home.”

Saturdays and Sundays may look different, but the goalkeeper gloves haven’t gone anywhere.

“I like giving back to the game that gave me so much,” Village said. “Having this as a job is a dream come true.”