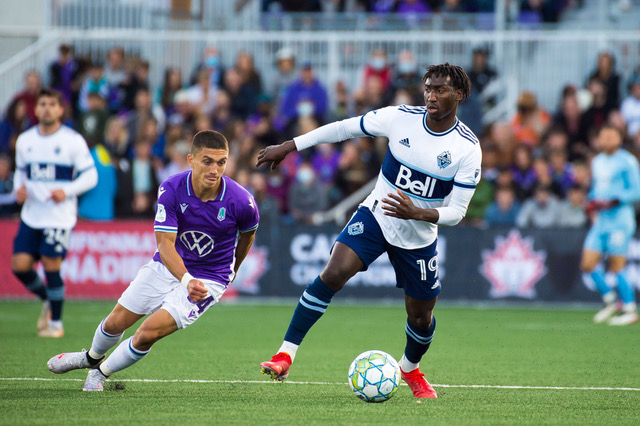 Unsurprisingly, the last MLS club to play against Pacific FC featured many, many connections between the two local rivals. But the Trident’s next MLS opponent, and the location of Wednesday’s match, also have some deep ties in the Pacific squad.

Manny Aparicio, Kunle Dada-Luke, Lukas MacNaughton, Jordan Haynes and Robert Boskovic all have experience in the soccer scene in Toronto or Toronto FC itself.

Familiar and familial setting for Aparicio “I joined the academy at 13 years old and I was on the first few academy teams that we had,” says Aparicio, “when I first started the training ground wasn’t built, we were training at Lamport Stadium which was a rental field.”

“I ended up moving up through the ranks there. When I was 17 years old I signed with the first team, and in my first year they sent me out on loan to Wilmington Hammerheads in the USL which was the affiliate for that year. And then they made TFC II so a lot of us were basically training with the first team and if we didn’t get any minutes or we weren’t on the game sheet we would play with the reserve team.”

Aparicio credits his experience with Toronto FC for preparing him for his career in soccer. “My experience with TFC was amazing, obviously I didn’t get to play as much as I would’ve liked but for me personally TFC gave me a lot. I had recently moved to Canada and I ended up being able to be part of a pro environment at such a young age, which was a huge thing for me. They just gave me that stepping stone to become a professional and be part of the national team. I’ve always been grateful for everything they did for me.”

Going back to Toronto for the Canadian Championship semifinal will be special for Aparicio for a couple reasons: a return to the club that gave him his first professional opportunity and a chance to see all of his loved ones in the city he grew up in.

“Looking back on it now, I think at the time I didn‘t realize this because I was young and took it for granted, but one of the best things was being able to be at home with my family, and with all
my friends that I grew up with being able to come out to games. I think that’s a huge positive.”

“Now being out on the Island, my parents were able to come out to visit but they only caught two games. Going from them being able to come to 15/20 games a year to being able to come to only come to three or four, I think that’s one thing where when you’re young you don’t really care about it because it’s not something you look at but now that I’m getting older and the years go by you really appreciate when your family, friends and loved ones can come watch you play.”

Studying, Playing Soccer and Making a Second Home
“I basically ended up there for school,” says MacNaughton, “I went to study architecture at U of T (University of Toronto). I did my four years there; I loved it. I’d actually only been there once before when I was a little kid, maybe when I was six years old and I remember seeing the CN Tower.”

“My mom brought me to school on my first day at U of T and we were walking around campus and I think CBC was doing interviews of students. They interviewed me and asked me ‘what’s
your impression of Toronto as a Canadian?’, and I remember being a bit confused because I’m a Canadian, I have Canadian citizenship, but I never lived in Canada before that, so I couldn’t give her an answer!”

“Even though (Toronto) isn’t where I grew up or where I’m from really, it’s somewhere that is definitely a place I call a second home. When I think of Toronto I don’t necessarily miss the city, it’s a great city, but the people in Toronto are what I love.”

The story of how MacNaughton finally got his opportunity to play soccer at U of T is best told in his storytelling style.

“I emailed the coach a couple times in the summer saying ‘hey I’m gonna miss the tryouts, is there any way I can try out afterwards?’. And he never got back to me. So then I was sitting with my mom watching one of their first games and I was thinking I could definitely play there! They had a pretty bad game and lost. So I went down to the changing room after the game and guys were coming out of the changing room so I was like:

And they were like, ‘no our coach isn’t here’.

So I said, ‘what do you mean? You played a game and didn’t have a coach?’

Then they said, ‘oh, our assistant coach is here.’

And I said, ‘okay can I speak to your assistant coach?’

So then he came out and I introduced myself and told him what had happened and how I never got an answer back.

And he said, ‘oh that’s too bad, we’ll keep your name and maybe next year we can bring you out in the winter season’.

And then he asked for my name and where I’m from so I said, ‘my name’s Lukas, I’m from Belgium’.

And he said, ‘oh you’re from Belgium?! Come out on Wednesday we have a training session!’

“So I went out on Wednesday and then went on their next road trip. Then one of the guys got sick on the bus so then I was in the starting lineup!”

The rest is history. And like a handful of Pacific FC players, was written both in Toronto and on Vancouver Island.

Don’t miss the Canadian Championship Semi-Final as Pacific FC take on Toronto FC at 4:30pm on Wednesday, November 3rd. Tune in at OneSoccer.ca on Channel 980 on Telus. Stay tuned to pacificfc.ca and follow the club on Twitter, Instagram and Facebook for the latest news.