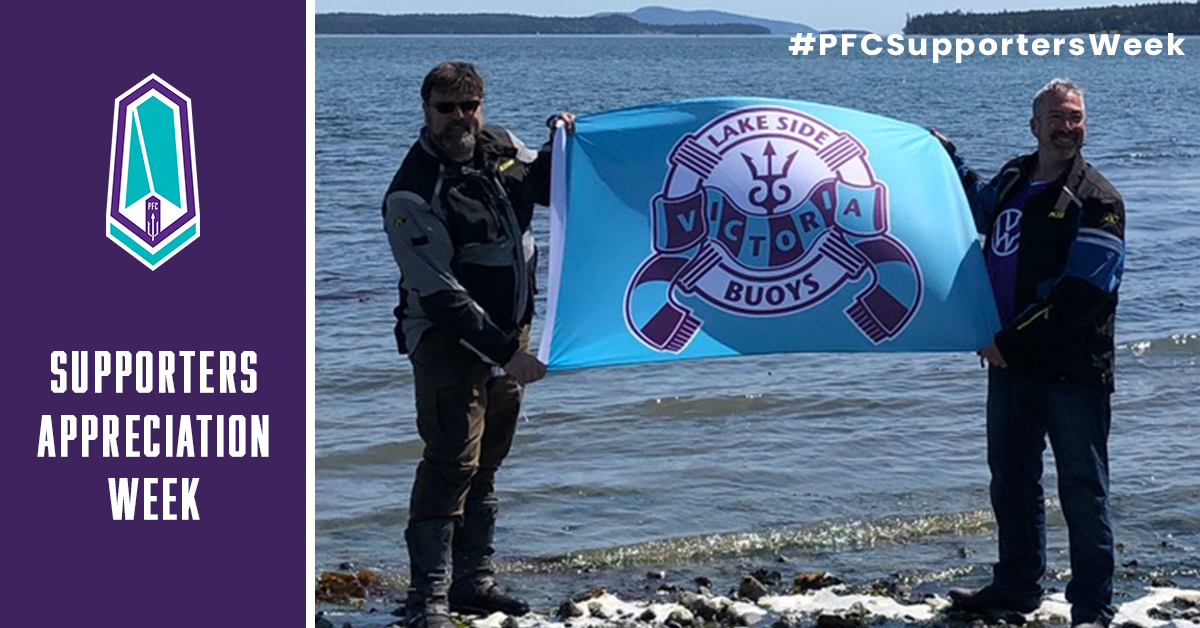 VANCOUVER ISLAND, BC – Pacific FC starts this week highlighting the amazing supporters who are so essential to the game. As Supporters Appreciation Week kicks off, three different stories will be told of supporters and their unique journeys with the Canadian Premier League (CPL).

We start the week off focusing on the incredible story of Steve Hemphill, an avid supporter in the inaugural season of the Canadian League. Hemphill, born in Glasgow, Scotland, began his soccer journey a few days before his family’s team, Celtic, were the first British team to win the European Championship.

Fast forward to 2014 Hemphill was helping lead his son’s team, Saanich Fusion, to win Provincials. As Pacific FC began in 2018, Hemphill joined one of the supporters groups, The Lake Side Buoys.

With some free time on his hands, Steve decided to plan a 7,000 km road trip on his motorbike across Canada coinciding with the inaugural season of the CPL.

“As well as enjoying the soccer,” explained Hemphill, “the sheer vast size of this incredible country was something to experience.  You don’t get the same sense flying over in a jet.”

Hemphill had the opportunity to experience games in Calgary, Edmonton, Winnipeg, York, Hamilton and Halifax.

“Seeing the Royal Tyrrell Museum in Drumheller, riding the glacier parkway from Banff to Jasper in May, feeling the winds on the Prairies,  the Museum of Human Rights in Winnipeg, the rolling landscape of Manitoba and Northern Ontario, the Saint Lawrence River through Quebec. To see the country from coast to coast while meeting soccer fans along the way – well it can’t be beat,” recounts Hemphill.

Hemphill set out with Ian Irving on May 1st discovering Canada and the communities spread out throughout this extensive nation.

“The best part was meeting like minded people across this country,” stated Hemphill.  “The level of support and enthusiasm for the success of a truly Canadian soccer league is immense.  There are dedicated fans in every town and city in this country.  When the league grows to its potential size it will be the strongest Canadian professional sports league that there is.”

The Vancouver Island supporter had unique experiences throughout the seven cities that have CPL teams. Whether it was a shared game with the River Valley Vanguard of Edmonton, or watching both a York9 FC game and Toronto FC game while in Ontario, or finally making the coast-to-coast road trip to be the “loudest person in the stadium when Terran Campbell scored the opening goal”, it was a tale to be told.

Speaking to Hemphill, the growing support for the game from coast-to-coast in this country has been amazing. Vancouver Island being a leading factor in this growth throughout the nation both for supporters and developing the game.

“Vancouver Island has a great soccer culture,” said Hemphill.  “I had travelled from Victoria to Campbell River to see my son play in Vancouver Island Soccer League (VISL) matches. Pacific has given amateur footballers across the island something to work for.  The Island is rich in soccer culture.  It is the best and maybe the only place in Canada where the game can be played year round.”

Hemphill spoke of the strong support that has surrounded Pacific FC on the Island with supporters groups like T.O.P. and the Lake Side Buoys leading the way with TIFOs, music, cheering and all of the above creating the atmosphere at Westhills Stadium.

“The supporters groups for Pacific are fantastic – with the Lake Side Buoys and the crazy supporters of T.O.P. We have so much to build on and enjoy when we finally get back to seeing games at Westhills. The tailgates, TIFO displays, and smoke displays are so much fun.

Hemphill finished off by saying, “Join one of the groups and get out to support PFC…you won’t regret it.”

Founded in 2018, Pacific Football Club brings professional football to Vancouver Island. Playing out of a renovated Westhills Stadium in Langford, the club provides an outlet for Canadian soccer players to compete at the professional level of the sport on home soil through professional opportunities and youth programming. For updates on Pacific FC, please visit www.pacificfc.ca