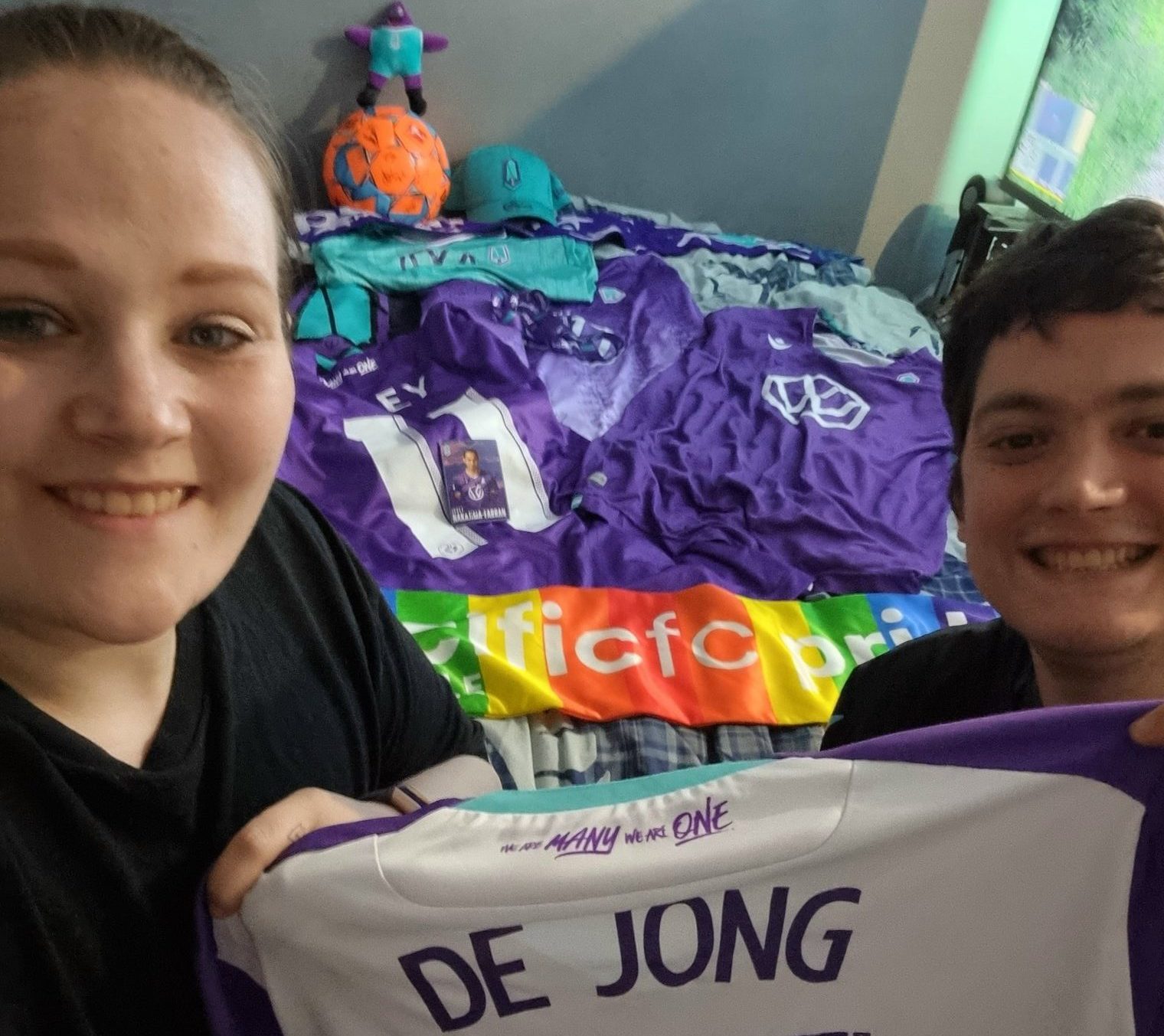 That’s where two Pacific FC super fans, with coastal roots just like the club itself, reside in Sheringham, England.

When Matthew and Tamsin first learned about the Canadian Premier League, the values and
community feel of Pacific spoke to them.

“When Matthew first read about the CPL becoming the top league in Canada, we looked
through the teams and Pacific stood out.”

“We ran through all the teams individually learning more about them and the ethos behind them
all,” says Matthew, “after reading Pacific’s it really stood out for Tamsin as the club shares the
same values and principles as her. It was the details behind the logo that spoke to her the most
as she’s from a coastal town in the UK, so they kind of went hand-in-hand.”

“For Tamsin, it’s the players and the family-feel, the club seems like a big family and it’s the
interaction between the club, players and fans that she loves the most. Also it’s the beauty of
the island itself, it reminds her of home. For me, it’s the emotion the fans feel when they’re
watching them play, it’s what the club means to the island and us from afar.”

The couple have attempted to create more Pacific FC fans in Sheringham, but it’s still just the
two of them putting in late-night/early-morning shifts to watch their team play.

“It’s always just Tamsin and myself, she’s watched every single game since the first one and I’ve
missed three or four, but we’ve stayed up until 3 a.m. and watched, which we absolutely love
doing even if it leaves us tired the day after!”

“We’ve got a treasure trove of merch that we love to show off and we always get approached
when wearing a Jersey or our PFC masks. We always hype the club up wherever we go. We
absolutely love showing the club off.” 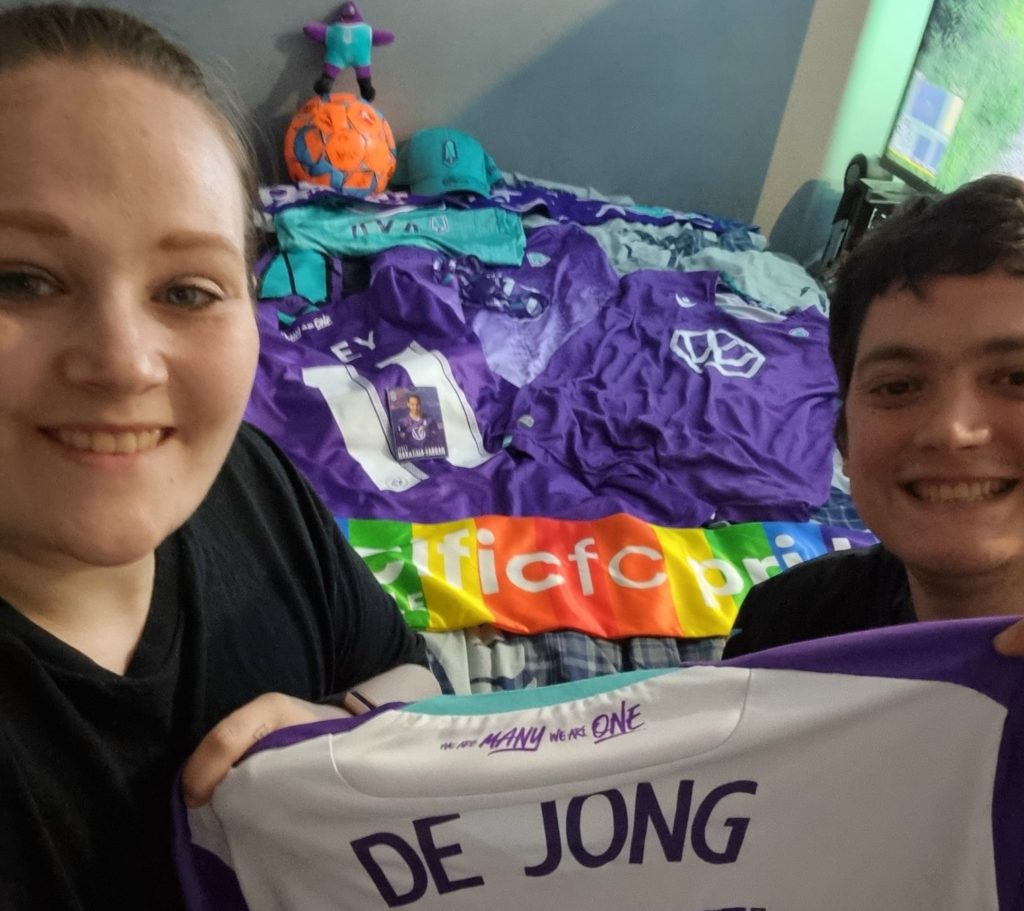 “We appear to be the only (Canadian Premier League followers) in this part of the UK, which is
something we enjoy.”

Both Tamsin and Matthew love Victor Blasco on the current squad but have formed a special
connection with a former Pacific FC player.

“Tamsin absolutely loves Blasco, and for me it’s Blasco too,” says Matthew, “we just love his flair
and his presence he brings to the pitch. His performance at the Island Games was a joy to
watch and we were super happy to see him score a couple. We also absolutely loved Issey
(Nakajima-Farran) and Marcel De Jong, and even formed a friendship so to speak with Issey
after he sent Tamsin some amazing voice messages from himself and other players for her birthday as well as sending us a signed Jersey with a little signed player card. We also received
a signed Match Worn De Jong Jersey from the Island Games which was insane.”

The personal touch provided by those at the club have made a positive imprint on
Matthew and Tamsin’s lives.

“Sadly, Tamsin has been in and out of hospital so I reached out to a couple of players
and Blasco sent a really nice video message to wish her good health which really lifted
her spirits and helped us both through a difficult time. I’ve built up a friendship with
Hamilton from the club who has gone out his way to assist me getting merch, it’s tricky
when you’re in the UK. I’ve also checked my inbox a few times and just seen messages
from Hamilton just checking in and making sure we’re doing okay which is something we
truly appreciate during these trying times. A while back I had a personal phone call with
Issey for over an hour where we just spoke about his career and it was absolutely
phenomenal to hear how his career progressed.”

The ethos of Pacific FC – to trust the kids – is the couple’s favourite thing about the club.

“It’s how we’ve built up the youngsters and focused the squad around them as well as bringing
in experience to guide them. We get very connected to the players. The talent we have matched
with the coaching staff is fantastic and the coach has really gotten some good play out of
players like (Kadin) Chung and (Sean) Young. We love the way that (Pa-Modou) Kah sets his
teams up and it’s always a thrill watching them, we both respect him massively as a coach and
for what he’s done for the team.”

Neither Tamsin nor Matthew have been able to visit Vancouver Island before but they are both
looking forward to the day that’s possible.

“When our life allows us to we will certainly be taking a trip over. Hopefully for a couple of weeks
so we can catch a game or two.”

“Thank you so much to everyone at the club who has welcomed us to the Pacific FC family, we
are so honoured and proud to be part of it and it holds a special place in our hearts and lives,
one day we hope to see you all in person and take in a game or two on the Island.”

Pacific FC will begin their season on June 26th at 2:00pm PST against HFX Wanderers as part of the Kickoff in Winnipeg. Pacific FC will return to Starlight Stadium in August. Be a part of the action with 2021 Season Tickets or support from afar with a Global Fan Membership! Stay tuned to pacificfc.ca and follow the club on Twitter, Instagram and Facebook for the latest news.