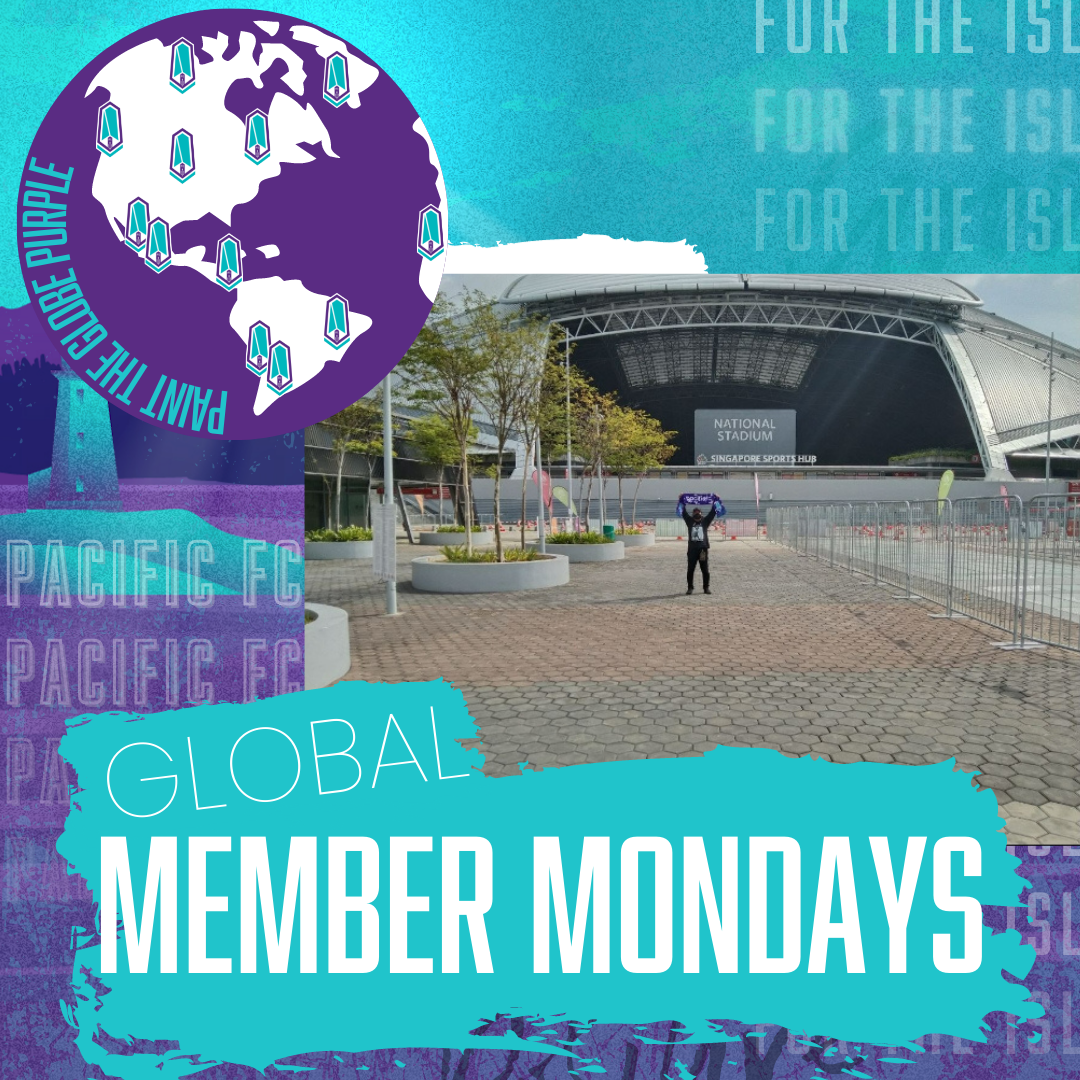 Introducing the Paint the Globe Purple Campaign. Join us as we connect with Pacific FC fans around the world and see how they support Pacific FC as part of our new Global Fan Membership program!  When beginning to “Paint the Globe Purple” it makes sense to cast a wide brush, so let’s start almost 13,000 kilometres away from where Pa-Modou Kah’s squad will take the field this season.

If you’re lucky, it’s about a 20-25 hour flight from Vancouver Island to Singapore with multiple
layovers, but there is a connective tissue between those two distant islands; Pacific FC.
Risha is a Pacific FC fan based in Singapore and has followed the club closely
since early 2019.

“I got to know about Pacific FC because Issey Nakajima-Farran signed for them in 2019. Apart
from that, I found out a lot about the Canadian Premier League through Instagram.”

“I met Issey in person before, he was playing for Albirex Niigata (a team in the Singapore
Premier League) back then. I also like the colour purple.”

Now, there may not be a Lake Side Buoys outpost popping up in Singapore any time soon, but
Risha stays repping the starfish purple of Pacific FC in his home country, and if that continues
maybe he’ll help create more Singapore-based fans of the tridents.

“I also own a signed Baldisimo match-worn jersey that I got direct from the Pacific FC store. It’s
very rare to see a replica soccer jersey with a purple colour.”

Risha is well-aware of the Canadian footballing connection to Singapore and feels that
connection to Canada himself.

“When I was a little boy, I watched Canada qualify for the 1986 World Cup in Mexico. There are
also a few Canadian soccer players that used to play in Singapore’s professional league, Jordan
Webb and Sherif El-Masri.”

Risha says the biggest stadium he ever visited was the 80,000-seater Shah Alam Stadium in
Malaysia, many more than the crowd that fills the Starlight Stadium, but not more passionate.
“I hope I can save up to buy a plane ticket to Canada and visit the Pacific FC stadium, easier to
say though.”

Before that day arrives and regardless of the current physical distance between Risha and
Pacific FC, Risha can stay tied to Pacific through this year’s Global Fan Membership; a way for
fans to stay true to the tridents and stay passionate in their purple paraphernalia, wherever in
the world they may be.

Pacific FC will begin their season on June 26th at 2:00pm PST against HFX Wanderers as part of the Kickoff in Winnipeg. Pacific FC will return to Starlight Stadium in August. Be a part of the action with 2021 Season Tickets or support from afar with a Global Fan Membership! Stay tuned to pacificfc.ca and follow the club on Twitter, Instagram and Facebook for the latest news.