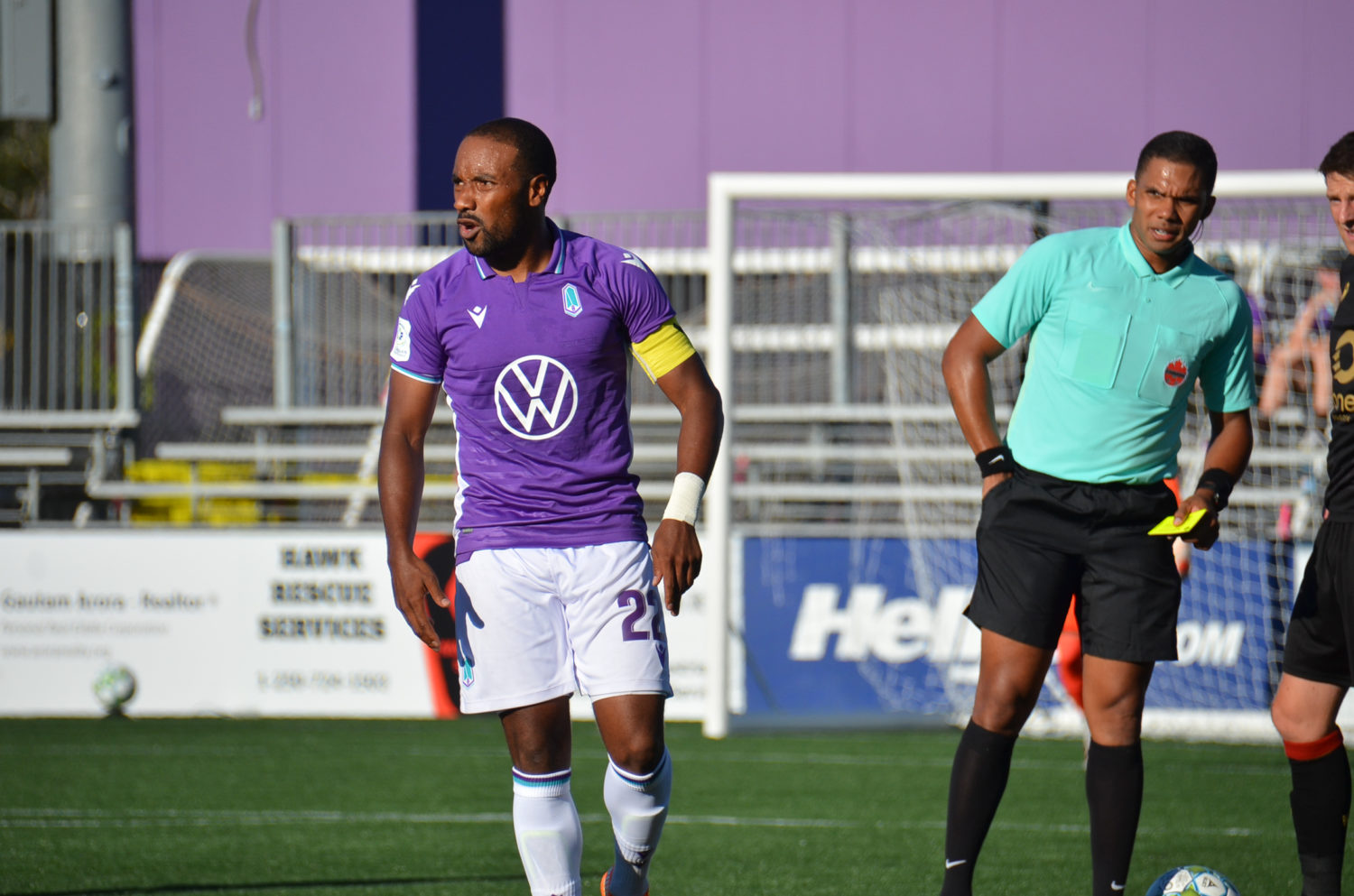 “We’re going to rise to the occasion”; How PFC is preparing for first-ever finals
December 3, 2021

One plane ride to Hamilton, a couple training sessions and many motivational speeches in the locker room are all that’s left before Pacific FC takes to the field for their first-ever Canadian Premier League final on Sunday.

This is the final hurdle in a season-long journey for the club but the origins begin before a ball was even kicked in 2021.

Kadin Chung, the first-ever Pacific FC signing, has been here since essentially the club’s foundation and he says the team’s journey towards a CPL title this season really started to ramp up immediately following the 2020 season.

“Just after the bubble, we put in a program from September 2020 to now,” says Chung. “Everyone’s been so disciplined and hard working that it would be such a big accomplishment (to win the North Star Shield). It would mean so much to us.”

Even though he’s only 23, Chung has grown into a leader on the team and recognizes what it takes to compete in big matches like this.

“Honestly it’s no different than any of the other games we’ve played this year. It’s an in-the-moment kind of game. I think the motivation is there already, so I don’t think anyone needs any extra motivation. Everyone just needs to put in that extra bit of work and step up their game, and I think everyone’s been doing that so far.”

Jamar Dixon, captain and mentor to many players on this young team, also knows how to guide his teammates into a final or other type of big match.

“It’s just a matter of assessing the game and letting the boys know that nothing changes,” says Dixon, “just keep your mind the same and stay level-headed.”

“The game’s going to start with 22 players on the pitch, nothing crazy is going to happen. It’s just about staying in our zone and focusing on the details that we have to. I just keep motivating them and telling them the positives they do and how they can impact the game. Overall it’s just a matter of understanding all the guys and giving them positive feedback.”

“The game of football is not complex. I think that sometimes people, because of the heat of the moment, switch things around but, from my perspective, I just look to simplify the game and that’ll help everyone. Especially because we have a young team, and sometimes I’ll say to slow the game down at certain points in the game and they’ll still play fast. So it’s just those little details that win you these games in the finals. It’s just a matter of understanding that and implementing it.”

While the game of football is not complex, it’s always nice to have the familiarity of playing at home. It’s unfortunate that the final won’t be played on the Island, but Chung knows the kind of support the team will get both back home and in the stands on Sunday.

“Playing at home would’ve been amazing. But now we feel like it’s almost an obligation to bring something home to them. I know that there’s going to be a few fans in the stadium so it’s going to be good. But the important thing is we go there and take care of business and then we bring back a trophy to celebrate at home.”

Both Dixon and Chung highlight the immense experience the team has gained this season because of the big matches they’ve already played in, and in many cases won.

“These guys, they’re up for it,” says Dixon, “that’s the thing with this team. All the players, guys starting and coming off the bench, they’re all ready to go in any big matches, from the Whitecaps to Toronto FC to the last Calgary match. All these games were tough, we had to fight and dig to get something out of it. So I think those games were big preparation for us and I think now it’s just a matter of putting everything on the line. Learn from the mistakes we made in those games, take the positives and take some strides forward with them.”

Chung echoes that sentiment and says he’s very confident in how the team performs in big games.

“It’s experience, it’s repetition. We’ve been here before, not exactly in a final, but we’ve been considered underdogs and we’ve been considered not likely to come away with a result, but we have this year. We did it against the Whitecaps, we did it against Calgary two weeks ago and we were close in Toronto. So I have no doubt that on Sunday we’ll be ready to go and we’re going to rise to the occasion for sure.”

Steps to Get Here And What it Would Mean to Win

Before the season, as he was being named Pacific FC’s new captain, Dixon said his goal for this season was to have the team feel they were taking the next step forward and to get to a final. Looking back on that now, he notices the major strides forward the team has taken this season.

“From last year I observed this team and I noticed there was something special here. I knew coming into preseason if we just kept pushing forward, go after what we really want and if we’re all on the same page we can accomplish that. So it wasn’t a fluke for me to be where we are. Everyone is supportive, everyone is on the same page and that’s because of the team’s dynamic that, not only I’ve instilled, but the coaching staff and the players. And again, that’s what’s part of my job, making sure we stick together and we can just go to war together. The battle we have on the pitch amongst each other shows the trust that we have going into matches together showing that people have our backs. That’s the culture that we have here.”

When thinking of what a CPL championship would mean, both Dixon and Chung described it as ‘everything’.

“It would mean everything,” says Dixon” the CPL is growing at such a rapid rate, every year it gets better and better and you’re seeing more and more talents pop up. Especially with where the men’s national team is going and the traction Canada Soccer is getting that also helps the CPL. The women’s national team as well, the whole package is just growing. I know that down the road it’s going to be even bigger. So to be able to attach your name to that title it’s a major accomplishment and I think it’s something that everyone should be extremely proud of and want to do.

“It would mean absolutely everything,” says Chung, “it’s the reason why we play this game.”

And for Dixon especially, a seasoned pro in Canadian soccer, being the one to lift the trophy first as the captain would probably mean a lot. Except he prefers to focus on how the rest of the team would feel after a CPL title.

“It would be amazing, but even though it’s me as the captain (who lifts it first), just to see these boys lift it and to see their joy would mean more to me than anything because I’ve seen these guys day in and day out put in the work. I’ve been alongside them putting in the work. So it would truly be a testament to everyone.